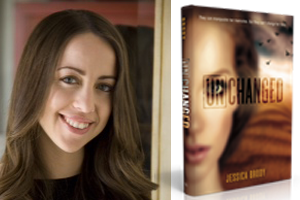 Sometimes I feel like a fraud standing in front of an auditorium of high schoolers, asking them to read my book. After all, I wasn’t a reader at that age. In my mind, reading was the equivalent of homework. The books they assigned us in class were of no interest to me. And most of the time, I just opted for the Cliff Notes.

I didn’t become a reader until college. I wish I could say it was because of some inspiring professor who reached deep into my soul and turned on a light switch I didn’t even know I had. But no. It was because of the Freshman 15.

You know, that strange cultural phenomenon in which you get to college and magically gain 15 pounds? That’s what happened to me. It was a problem. And I didn’t have a solution.

My roommate, on the other hand, did. She dragged me to something called a “gym” and stuck me on this horrifyingly pointless contraption called an “elliptical.” Basically, you pedal and pedal and go nowhere. But I was determined to lose the weight. So I programmed it for 40 minutes and dove in with full force. After a while, however, I started to get really tired…and sweaty. Not to mention, incredibly bored. I glanced down and only two minutes had passed. I was about to give up.

Then my roommate made another unhelpful suggestion. “Why don’t you read a book? It’ll make the time go by faster.”

To which, I responded, “I already finished my homework.”

That’s when I gave her the most sympathetic look I could muster (through my sweat) and said, “Honey, there’s no such thing as a book for fun. That’s called television.”

We went back and forth until she finally convinced me to try the book she was reading. I waded in with reluctance.

But after a few minutes, to my surprise, I found I was laughing and turning the pages with zeal. I was completely absorbed in the story. Then I heard this weird beeping sound. I looked down to see that my forty minutes on the elliptical were up! Just like that!

What is this magic book that makes time cease to exist?! I thought.

The book was called Bridget Jones’s Diary by Helen Fielding and it changed my life. Not only did it turn me into a reader, but it introduced me to the kind of books I wanted to write. Books for fun. The stories you pick up after you finish your work. Books that hopefully make 40 minutes on the elliptical go by in a flash.

When I stand up in front of an auditorium full of students, I tell this story. I’m not ashamed of it. If one person becomes a reader after picking up one of my books, then it all will have been worth it. Then I will have returned the gift that was given to me. There’s not much more I can ask for than that.