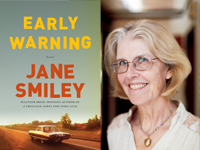 A few weeks ago, I made a list of my favorite novels for the last 65 years (I turned 65 in September), two every five years, starting with "King Midas" (I think I was four when I read that) and ending with The Transylvanian Trilogy, by Miklos Banffy, which was written in the 1930s, in Hungarian, about the end of the Austro-Hungarian Empire. It is a page turner, not because you want to know what happened, but because you want to know HOW it happened. Banffy is a master storyteller, who doesn't mind including feckless politics, sexual passion, and precisely rendered landscapes, once loved, now lost. It took me a year to read the whole trilogy, but going slowly was like taking many short fabulous vacations, and as a result, Banff's world seemed to inhabit me more deeply than that of any other book I've read lately.

Twenty-seven books are on my list. It’s a map of what I loved at one point (Pride and Prejudice, for example), and what that gave way to (Kristin Lavransdottir)--and I didn’t leave out books that I once adored, but no longer care to read (like Crime and Punishment).

The greatest luxury of the world we live in (and by the way, that was one I loved, too, when I was ten, The World We Live In--I read the chapters about dinosaurs, volcanoes and the Earth hot as a burning coal over and over) is how rich we are in books, how therefore in access to the minds of others as they sit with their notebooks or at their desks and ponder what it feels like to be alive.

The oldest book on my list is Boccaccio’s The Decameron. The newest is The Space Between Us, by Thrity Umrigur. But every one of them strikes a familiar chord as I consider the world I live in--Emile Zola's The Kill might as well take place on Wall Street; Charles Dickens' stalker in Our Mutual Friend is as insightfully drawn and up to the minute as the nightly news.

But what I learn is not what I cherish the most about these books. What I cherish the most is the words, each one as real as a pebble, as ephemeral as a breath. Each one, half chosen or half not chosen, appears magically in the writer's mind and then on the page, and after that the writer decides, yes or no, leave it in or take it out. In that thin stream of words I see the shimmer of a mind at work, not thinking of me, but knowing that I am out there.

What will I imagine? The writer has no way of knowing, and yet she (or he) trusts me to imagine something, to be moved and entertained. What I love about books is that silent communication, word by word, thought by thought, and our miraculously routine faith that such communication is possible.