An Essay on Reading 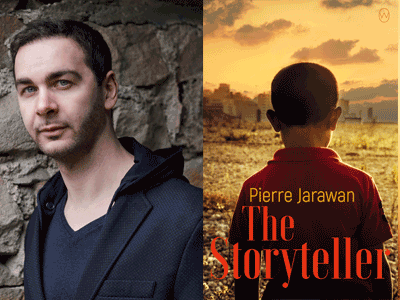 I was eleven when my father took me to the flea market. I remember the day being sunny. When I think back, I see us crossing a bridge, his arm resting on my shoulders. Most of the time, my father walked hunched-over. As if he was carrying the weight of his lost home on his shoulders. “In Lebanon, the flea market is called bazaar,” he told me. “Some of the merchants have stalls. Some sell their products off the backs of their camels. And some merchants are camels themselves.”

I remember a poem my father wrote; it was about a pine tree. When he wrote in German, every single word was a stumbling block for him. “I try to write in German, but I feel like a painter with no colors”, he once said.

At the flea market my father was the one who stopped in front of the books. He carefully traced the words on the pages, as if touching them was the way to access the beauty of this foreign language. I imitated him. He bought me the first book I touched. “Your first contact with literature”, he said. I did not understand what he meant.
My father believed that the magic of stories can keep us alive. Maybe that’s why he talked so much about home.

That night, I started reading the book he had bought me and, much later, I fell asleep in my clothes like a traveler. He came up with that image the next day. “Books allow us to travel to different worlds” he said. “They can make us feel connected to places we’ve never been.”

“Places with bazaars and camels?”

“There are one thousand and one places more.”

When I pass by a flea market today, I can never leave without having bought a book. I don’t know where to pile them up anymore, but I have the feeling of taking home the language that was never home to my father.

A few years later, I wrote my first poem. It was about a pine tree and I gave it to him.

When I think back to the day my father took me to the flea market, I see us crossing a bridge, his arm resting on my shoulders. I am sure that his arm rested on my shoulders. But where the flea market used to be, there is no bridge. There never was a bridge. Maybe I built it for us in my imagination, so we can go back together to the day he bought me my first book, and to be able to keep that day alive.

PIERRE JARAWAN was born in 1985 to a Lebanese father and a German mother and moved to Germany with his family at the age of three. Inspired by his father’s imaginative bedtime stories, he started writing at the age of thirteen. He has won international prizes as a slam poet, and in 2016 was named Literature Star of the Year by the daily newspaper Abendzeitung. Jarawan received a literary scholarship from the City of Munich (the Bayerischer Kunstförderpreis) for The Storyteller, which went on to become a bestseller and booksellers’ favorite in Germany and the Netherlands.  Meet Pierre at Books Inc. in Berkeley on April 24 at 7:00 pm.