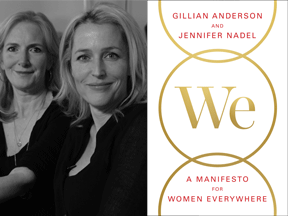 GILLIAN ANDERSON
I wish there had been a moment in my youth when books became my savior. All those weekends and endless summers kicking at boredom. Had I used that open space and freedom from responsibility for innocent endeavors like awakening to the pleasures of literature, I might have…well let’s just say, gotten into less trouble. My daughter had that epiphany– where she suddenly woke up to the vast landscape of titles and adventures that stretched out behind her. She delighted in the realization that one could cluster authors or themes or genres or most excitedly that if one were studying or interested in a particular time in history, reading the novels of that period would add context and depth and personality. Oh had that been the nature of my thoughts at that time! I admitted to a tinge of jealousy. But also grief that so much time had been lost. It’s somehow not the same in middle age. Or at least the pressure of time weighs heavy on that luxury. The unread books I have stacked throughout my house awaiting an endless summer that may never come. I have a friend whose life-long relationship with books is evident in the gift she gave her daughter when she moved away to college. She asked all of their closest family friends to choose a favorite book, write an inscription, and then lovingly gathered them up like friends accompanying her daughter on her journey, navigating the quality of her adventure. I left home with books too, but I’d stolen them from my father’s coveted collection. Had he not retrieved them, would they have been read? Was I ever that person? Or would they like now, be stacked and dusty, awaiting a different kind of human who intrinsically understands the salvation that lies within? Perhaps.

JENNIFER NADEL
I was an odd child. I grew up in the middle of nowhere with no friends and no idea how to make any. My mum drank and my dad lived in a study with a no-entry sign on the door. And then I discovered books. Who needs friends or even parents when you’ve got a whole heap of characters that can never reject you and are there on demand? I hoovered them up. Not just for imaginary companions but also to try to get a vague handle on how the world worked. Books were where I first found out about sex (way too early), fell in love – Mr. Rochester (big mistake) and lost my faith (thank you Samuel Beckett). They are also where I learnt about politics, feminism and psychology and discovered a spiritual path. The Road Less Travelled re-wired my thinking – so pain was inevitable – not a sign that I was an absolute loser. And then The Artist’s Way encouraged me to believe that one day I too could write books. And now, guess what, I do! How great is that. And I also thankfully have some very dear friends who exist in real life.

Gillian Anderson is an award-winning film, television, and theater actor and producer, writer, and activist. She currently lives in London with her daughter and two sons.

We: A Manifesto for Women Everywhere (Hardcover)