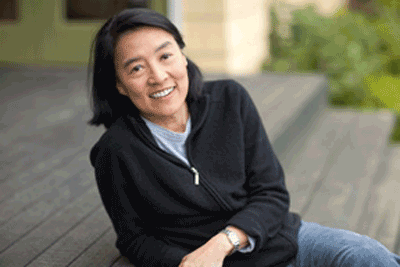 An Essay By Gail Tsukiyama

OTHER WORLDS, OTHER VOICES

For as long as I can remember, I believed that reading a book was like holding a small piece of the world in my hands.  As I turned each page, I traveled to a new place, or met a new friend, and was invited into lives that remained all mine for that moment in time.  Over the years, reading has not only given me knowledge of the physical world, but has revealed the wide complexities of human nature.

I was greatly influenced to read by my mother, who read all the world classics translated into Chinese.  I remember her telling me that some of the Russian names in Tolstoy’s Anna Karenina were so long they took up an entire column when written in Chinese characters.  (Chinese was traditionally read from right to left and up and down the page.)  She later read in English and remained a voracious reader all of her life.  I caught what I call “book fever” from her at a young age and I can’t imagine my life without books.

I always tell writing students that if they want to write, they have to read.  As an aspiring writer, I read poetry and authors such as Alice Munro and Raymond Carver who taught me how to use language sparingly, while still other authors opened my eyes to the richness of other cultures and the importance of telling stories outside the realm of their own lives.  Where would I be now as a writer if I hadn’t read Mary Renault’s Fire from Heaven and The Persian Boy about Alexander the Great, or John Steinbeck’s The Grapes of Wrath, or Maxine Hong Kingston’s The Woman Warrior, when I was first so passionate to write and so utterly impressionable?  It was those books and countless others that laid the groundwork for my own writing, unknowingly giving me the courage to dream and step beyond my own world.

When I first began to write, there were very few Third World voices being published, but in the past twenty years there’s been a proliferation of books that I’ve loved, and that continue to inspire me; Family Matters by Rohinton Mistry, The Last Report on the Miracles at Little No Horse by Louise Erdrich, The God of Small Things by Arundhati Roy, and Under the Red Flag by Ha Jin are just some of the stories that have led me on wondrous journeys into other cultures.

We have so much to learn about the world we live in, and we are so lucky that the simple act of picking up and reading a book has the lasting power to educate and illuminate.