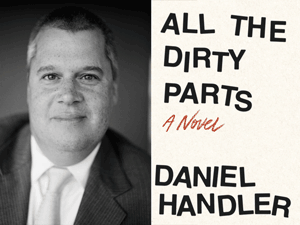 First, sex.  The sexy book which served as part of the inspiration for All The Dirty Parts is Oscar Hijuelos’s Pulitzer prizewinning novel The Mambo Kings Play Songs of Love.  This is a very beautiful book, a story of immigration and culture shock and sadness and fame, and also it’s stuffed with sex.  Is there a more gorgeous book to read in the moment we’re in right now?  Probably not.  Also, once I bought a drink for a man in the Dallas airport after I decided he was Oscar Hijuelos, but he wasn’t.  That’s another story though.

San Francisco’s own Stephen Elliott---who, like a lot of San Franciscans, lives in Los Angeles right now--wrote a terrific book called My Girlfriend Comes to the City and Beats Me Up, about his own transgressive and fascinating sexual preferences.  It’s a romantic and fierce book and also answers a lot of questions you might have about the practicing of painful sexual practices in case you don’t actually do that yourself.  And while we’re on the subject of great San Francisco writers, the magnificent Michelle Tea, also currently living in LA, is never afraid to plumb the delights and terrors of sexuality.  All of her books are wondrous and I recommend a different one each week.  This week, let’s go with Rent Girl.

I’m on a roll, so I’m going to recommend yet another San Francisco luminary who likes to get dirty: Justin Chin, a brash and often unnerving poet.  We lost Mr. Chin far too soon, but his Selected Works is a great place to enter his hungry and pervy brain.

Speaking of specific brains, have you read Sheila Heti’s How Should A Person Be?  It has plenty of sex in it but is friendly and hypnotic.  Heti is not from San Francisco but don’t hold that against her.

There are, of course, a ton more great books with a lot of sex in them--Groove, Bang and Jive Around and Lolita, how could I not mention both of those?--but let’s move on to books in short chapters.  The monarch of short chapter books is Mary Robison’s Why Did I Ever, a masterpiece and one of my favorite books on the planet.  My pal Jenny Offill and I both took much inspiration from Why Did I Ever, me for All The Dirty Parts and her for The Department of Speculation, which my sister loved so much she bought I think eight copies and gave them to all sorts of people.  And of course there are two writers whose short-chapter novels are collected in perfect omnibuses: Barry Gifford’s Sailor and Lula: The Complete Novels which are buggy dark crime novels--the first one became David Lynch’s Wild At Heart--and James Marshall’s The Complete George and Martha, which no home should be without.

Hippos and friends: this is why we have literature.

DANIEL HANDLER  is the author of six novels. As Lemony Snicket, he is responsible for numerous books for children. His books have sold more than 70 million copies and have been translated into 40 languages, and have been adapted for screen and stage. His first play, Imaginary Comforts, or The Story of the Ghost of the Dead Rabbit, will be produced this fall at Berkeley Repertory Theatre. He lives in San Francisco with the illustrator Lisa Brown, to whom he is married and with whom he has collaborated on several books, and one son.  Daniel will be at City Arts & Lectures on October 2.

All the Dirty Parts (Hardcover)