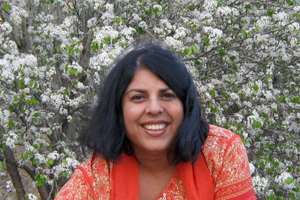 An Essay by Chitra Banerjee Divakaruni

My first year in America was a dark one. All the plans I'd made to go to college fell apart due to lack of finances. I had to take up a babysitting job because I wasn't trained to do anything. I was ready to give up and go back home when books --and a person who loved books--saved my life.

It happened on a freezing evening in Chicago when the bus I was on broke down in front of a library.

As I walked into the building--mostly to keep warm--it struck me that I hadn’t been in a library ever since I’d arrived in America. I hadn’t read a single book.

I walked to the front desk and asked the woman sitting there—a tag pinned to her cardigan said, A. Berenson, Librarian—if I could borrow a book. She asked me if I had identification. I produced it. She typed out a card with my name on it. It was that simple. When I asked her how many books I could borrow, she said, “As many as you can carry out! What are you looking for?”

There was such genuine interest in her voice, that I was emboldened to confide to her the  dream that seemed to be slipping further from my grasp each day.

“I want to go to graduate school and study American Literature,” I whispered.

I had expected a look of disbelief, perhaps even pity.  But she nodded as though what I said was entirely possible. She took me to the stacks where she paused, considering carefully, then handed me a book. The Great Gatsby, the title proclaimed.  I had never heard of it, but already I trusted Mrs. Berenson. She picked out several other books.  When I walked out of the library, hugging their sweet weight, the night had grown warmer. Or was the warmth inside my heart?

That night I opened The Great Gatsby and plunged into a fascinating world of affluence and excess, of desire and disappointments. My own problems receded as I participated in Gatsby’s drama and waited tensely to see if he would find love. I stopped reading only when exhaustion forced my eyes shut.

I took the book to work the next day and read it in between my duties. When my young charge threw his usual tantrum, I ignored him and kept reading. This novel response astonished him into silence.  In three days, I’d finished the book. I took it back to Mrs. B, and expressed to her my outrage that Gatsby had been killed, that fiction could be as unfair as life. She listened with her calm smile, then said, “But it’s made you care. It’s made you want to do something about such things, if you get a chance.  Isn’t that more important?”

I’d never thought about reading in that way before. A small, very small thought flashed in my mind for a moment: I’d like to write like that someday. Outrage my readers. Make them care. Make them do something about injustice.

Over the next months, Mrs. B gave me many other books. Native Son. The Woman Warrior. Sister Carrie. The Turn of the Screw. My Antonia. Fahrenheit 451. The Adventures of Huckleberry Finn. Cat’s Cradle. Bless me Ultima. After I finished each one, she took time to listen to my responses.

Something happened to me in those months that I can’t explain. Though my outer circumstances hadn’t changed, my attitude was different. Perhaps it was because Mrs. B took my opinions seriously and encouraged me to think large.  Perhaps it was that she chose for me books where characters struggled, like me, to achieve the American Dream—often under circumstances far worse than mine.

The end result: I stayed on in America, managed to get into graduate school, and ultimately became a writer. Books saved my life--and I remember that every day as I now create my own books.