An Essay by Alison Anderson 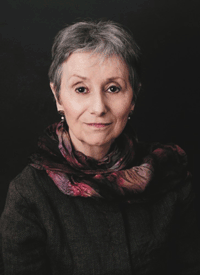 Two images come spontaneously to mind when I stare at this blank page, to write about reading: the first, some forty years ago, in a country that no longer exists: people standing in line, waiting for something—bread, shoes, tickets to a concert, a newly published book—and some of them are reading. Standing there in the heat with the city swirling around them, armed with patience and a poorly printed volume: Soviet Russians, reading books that have not been censored, that they can openly display. I was impressed, as a student for a month in Moscow, to see the waste of time so well saved; if it took several hours or more to buy a pound of fish or a box of washing powder, why not read, enlarge one’s mind, travel on the one passport that was easily obtained?

Fast forward to last month, last week: I’m on a commuter train in Switzerland. I’ve taken this train hundreds of times, over eight years: over one month, I might see one person reading an actual physical book, if that. These commuters all stare, rapt, into their little black screens. I feel a desolation in that train carriage, as if for all the technology wafting through the air, along with French and English and Portuguese and even Russian, I cannot communicate with these screen-gazers; as if I spoke a language that they don’t speak, called Reading.

Now perhaps this is unfair, the train is not the ideal place to read any more, it is noisy  and crowded, and the rides are usually only short; perhaps the commuters wait until they get home to take out a book or an e-reader, to luxuriate in the latest Scandi thriller. I somehow doubt it, though. Reading responds to a deeper need they probably rarely feel: these commuters, mostly young, have work and friends and family; they live in an affluent, relatively safe country. They all have health care. The longest lines they’ll stand in these days are to buy freshly made hamburgers at one of the trendy new restaurants in town. Reading, for most of them, is merely a luxury entertainment, slow and old-fashioned at that, something their parents did.

But you who are reading these words of mine, you know the importance of reading; you know that it is about another, more spiritual kind of sustenance, about taking that blank time and going into that deeper place where loss and struggle and loneliness are offered momentary relief; where you can learn and travel but also find a friend, a confidant, in an empathetic writer. 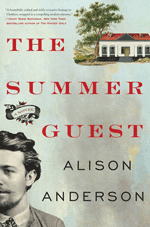 What if we could start a movement, and read a physical book whenever we’re stuck in line—as we seem to be more and more frequently in the globalized world, waiting not for Polish pickles or East German cheese but boarding passes and the consent to travel. What better way to protest against the tyranny of time?

Alison Anderson, a native Californian, works as a literary translator in the Swiss Alps. Her many translations include Europa Editions The Elegance of the Hedgehog by Muriel Barbery.  Her book , The Summer Guest:  A Novel will be released May 24!