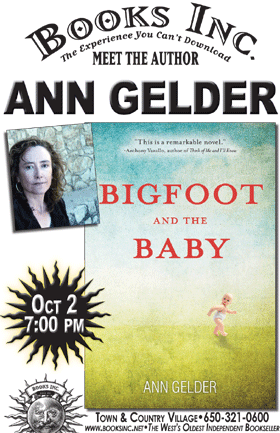 A previous professor of Comparative Literature at Stanford University and UC Berkeley with writing appearing in several publications, including The Rumpus and Tin House, Ann Gelder shares her debut novel, Bigfoot and the Baby. A delightful black satire which examines the interplay of capitalism and religion in 1980s America, Ann's debut is for anyone who seeks to explore life’s mysteries with wit and wild humor.

*Due to unforeseen circumstances, Harriet Chessman will unfortunately not be participating in this event with Ann as originally scheduled.

Bigfoot and the Baby (Paperback) 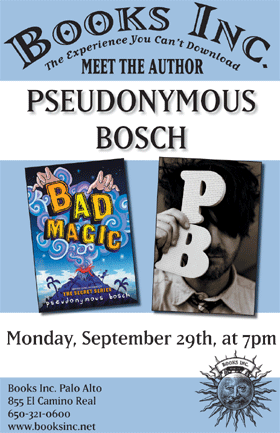 Books Inc. Palo Alto proudly presents Pseudonymous Bosch, author of the bestselling Secret Series, discussing the first book in his exciting new mystery trilogy, Bad Magic. Thirteen-year-old Clay, a boy who no longer believes in magic, is blamed for the graffiti on his classroom wall. As punishment, he's sent to Earth Ranch, a camp for "troubled" kids on a remote volcanic island where magic is the last thing Clay expects to find.

Sukey Forbes shares her moving and utterly unique tale of one mother's undying love for her child, The Angel in My Pocket: A Story of Love, Loss, and Life After Death. With a mission to help others by sharing her own story of the sudden loss of her six-year-old daughter, Charlotte, Forbes chronicles a world of ghosts that reawakens readers to a lost American spiritual tradition, and explores her rich family heritage--which includes her great-great-great-grandfather, Transcendentalist Ralph Waldo Emerson.

The Angel in My Pocket: A Story of Love, Loss, and Life After Death (Hardcover)

A 2014 First Place winner of the L. Ron Hubbard Award, Megan O'Keefe shares the 30th Volume of the anthology L. Ron Hubbard Presents Writers of the Future: The Best New Science Fiction and Fantasy of the Year, which features her prize-winning story, Another Range of Mountains. Featuring works by twelve writers and twelve illustrators selected by the biggest-name authors and the biggest-name artists in the field, this legendary series showcases a talented group of names to watch!

L. Ron Hubbard Presents Writers of the Future Volume 30: The Best New Science Fiction and Fantasy of the Year (Paperback)

Books Inc. Palo Alto proudly presents Colbert Report Featured Authors Edan Lepucki, author of the breakout hit California, and Stephan Eirik Clark, author of the clever satire, Sweetness #9--of which T.C. Boyle said "Funny and moving. After this, nothing will ever taste the same again."

About Edan Lepucki: A graduate of the Iowa Writers' Workshop, named "A Face to Watch for 2014" by The Los Angles Times, and newest bestie to Stephen Colbert, Edan's short fiction has been published in Narrative Magazine, the Los Angeles Times Magazine, Meridian, FiveChapters, and McSweeney’s, among others. She is a staff writer for The Millions, and teaches creative writing at the UCLA Extension Writers’ Program and for Writing Workshops Los Angeles, which she founded.

In 2009 she won the James D. Phelan Award, and  in March of 2011, she won second place in the 3 Quarks Daily Arts and Literature Prize for her essay, “Reading and Race: On Slavery in Fiction.”

About Stephan Eirik Clark: Born in West Germany to a Norwegian mother and a Texan father, Clark split much of his childhood between England and the United States, and has lived in five states and five countries, including Ukraine, where he served a Fulbright Fellowship, and Russia.

Clark has taught writing at UC Davis, USC, and Kharkov National University, the second-oldest university in Ukraine. He holds an M.A. in English with a Concentration in Creative Writing from the University of California, Davis and a Ph.D. in Literature and Creative Writing from the University of Southern California. A former print and radio journalist and one-time member of USC Film School’s filmic writing division, he currently lives in St. Paul, Minnesota and teaches at Augsburg College.

The Owner of Butow Communications Group, author or co-author of over twenty technology guidebooks for John Wiley & Sons, Que, McGraw-Hill, Sybex, and Addison-Wesley, previous Windows XP instructor for Ed2Go online training courses, technical writer, and online marketing specialist Eric Butow discusses his full-color guide to everything you need to know about Google Glass--from setup and configuration, to tapping into its' amazing features--with the essential guide, Google Glass for Dummies.

The Peninsula Parlour presents former fiction editor at The Cortland Review and current member of the San Francisco Writer's Grotto, Natalie Baszile, discussing her stirring and unforgettable debut novel—whose early version won the Hurston Wright College Writer’s Award, was a co-runner up in the Faulkner Pirate’s Alley Novel-in-Progress competition, and had excerpts published in Cairn and ZYZZYVA--Queen Sugar. Natalie will be in conversation with Lisen Stromberg and a portion of this evening’s proceeds will benefit Abilities United.

Editor-at-large for Outside Magazine and with articles appearing in numerous publications, including National Geographic, The New Yorker, and Esquire, international and New York Times-bestselling writer Hampton Sides shares his latest masterfully written work, In the Kingdom of Ice: The Grand and Terrible Polar Voyage of the USS Jeannette. A white-knuckle tale of exploration and survival, In The Kingdom of Ice is a spellbinding story of heroism and determination in the most unforgiving territory on Earth.

In the Kingdom of Ice: The Grand and Terrible Polar Voyage of the USS Jeannette (Hardcover) 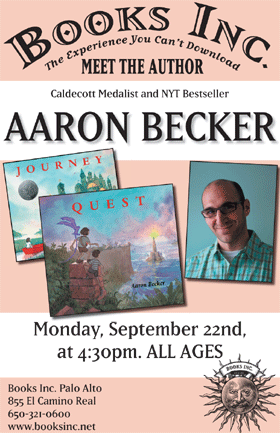 A king emerges from a hidden door in a city park, startling two children sheltering from the rain. No sooner does he push a map and some strange objects into their hands than he is captured by hostile forces that whisk him back through the enchanted door. Just like that, the children are caught up in a quest to rescue the king and his kingdom from darkness, while illuminating the farthest reaches of their imagination. Colored markers in hand, they make their own way through the portal, under the sea, through a tropical paradise, over a perilous bridge, and high in the air with the help of a winged friend. "Journey "lovers will be thrilled to follow its characters on a new adventure threaded with familiar elements, while new fans will be swept into a visually captivating story that is even richer and more exhilarating than the first.

With twenty-five years experience as an employee or a consultant throughout Silicon Valley, Katherine Maxfield shares Starting Up Silicon Valley: How ROLM Became a Cultural Icon and Fortune 500 Company. Full of humorous anecdotes and the wisdom of some of Silicon Valley's most respected leaders, Katherine's reflections on this game-changing company is an intimate story of one of the Valley's most important and culturally influential companies--one that continues to influence Silicon to this day.