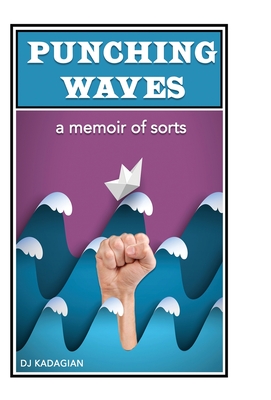 They say God doesn't play dice. They say there's a reason for everything. There are no coincidences. In quantum physics, they say everything has already been determined from the moment of the big bang. And now they're talking about the simulation theory. That this whole thing is an illusion and could get snuffed out if that cosmic kid playing his matrix-style video in the basement of his parent's house gets bored and pulls the plug. Everyone gets bored with the same game eventually. So what's the point of our dizzy incarnations?

Punching Waves is a memoir written by a human being just trying to make sense of it all. One part rags-to-riches, one part boy-meets-girl of his dreams-all bookended by a dark childhood and the tragic loss of a child. His has been a high-octane life lived at the edges. From his journey into the Maze Desert to sit on a rock in solitude, to traveling deep into the Amazon Jungle to confront his greatest fears while participating in the sacred, and at times, terrifying ayahuasca ceremonies. From a brief stay at divinity school to his wrestling with an army of overmatched therapists. ​

Through it all, you will get to know a character whose spirit was never broken because he knew he could always punch his way out of anything life could throw at him, while somehow seeing the humor in it all. Even more so when he's properly medicated.