The Warlock Queen: Book 13 of the Grey Wolves Series (Paperback) 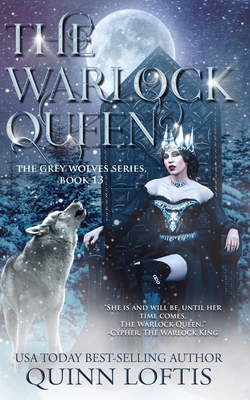 This is book number 13 in the Grey Wolves series.

She is and will be, until her time comes, the warlock queen. Cypher, the warlock king.Peace has come amid the storm. But the cost by which that peace was earned was great-the lives of the Romanian pack alphas, and Cypher, king of the warlocks. Now, the Great Luna has declared a period of mourning, allowing her children a brief respite in their battle against the Order of the Burning Claw. A violation of the command means certain death. But peace doesn't extend to everyone. Lilly Pierce, the surviving widow of the warlock king, must now take his place as the leader of the warlock race. Unfortunately, she's in no condition to do it. Her heart has been shattered. Lilly has found love twice in her life, and both times, it's been ripped away. Now, the warlock clans are looking to their new queen for guidance, or waiting for her to falter. To keep her throne, Lilly will have to prove she's worthy of it, or risk losing more than just her title. The last thing the queen needs in her grief-stricken state is to start hallucinating... Murderer. Traitor. Outlaw. These are just a few of the words that describe, Myanin, the disgraced djinn warrior. And for a time, those words didn't bother her. But as the djinn becomes more acquainted with the inner workings of the Order of the Burning Claw, she begins to understand how truly evil her fellow supernaturals can be. Is that really the person she wants to be? Is that the life she wants to lead? Not long ago, Myanin would have done anything to get back at her former lover, Thadrick, including murder. But an encounter with her Creator has the djinn questioning everything, including whether she is beyond redemption. Two women, both suffering loss, both languishing in their misery, both faced with impossible choices. Is it possible the queen and the djinn could find salvation in one another?