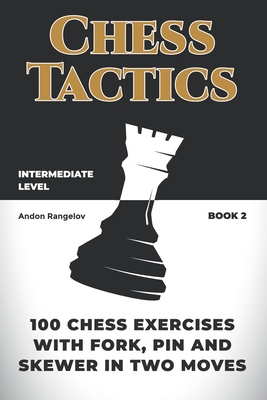 In chess, a tactic is a series of moves that limit the opponent's choices while potentially gaining an advantage. Fork, pin, and skewer are three main tactics in chess, and we provide 100 exercises in two moves to be practiced. The book is appropriate for players of intermediate level.

If you attack two of the opponent's pieces at the same time by using one piece, this is called a fork.

When a defensive piece is stuck in a pin, it can't move without exposing a more valuable defending piece on the opposite side to assault.

A skewer is an attack upon two pieces in a line and is similar to a pin.