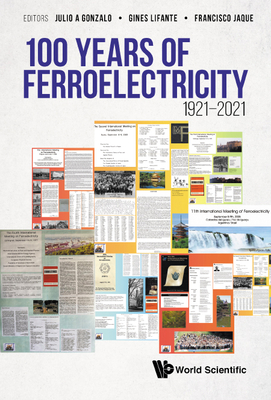 Since the discovery in 1921 of ferroelectric properties in Rochelle salt by Valasek, no new ferroelectric material was found until Busch and Scherrer in Switzerland in 1935 discovered ferroelectricity in Potassium dihydrogen phosphate (KDP). However, during the Second World War, researchers in the US in 1943 discovered ferroelectric materials such as BaTiO3 having ferroelectric properties well above room temperature, that led to an explosion of research after the war in Western and Central Europe, Russia, and Japan, because of their promising and potential applications.This book gives an overview of relevant experimental and theoretical work in ferroelectricity. It is organized into three Sections, corresponding to three time periods. The first (1921-1960) includes early work by Valasek, works by Busch and Scherrer, Mason and Mattias, Shirane and Takeda, ending with theoretical work by Cochran on crystal stability and the soft mode theory of ferroelectricity. The second one (1961-2002) includes a number of experimental and theoretical publications on ferroelectric materials and ferroelectric transitions. The number of international meetings began to increase, and the number of papers increased exponentially. New subfields at that time included ferroelectric liquid crystals, thin films, dipolar glasses and relaxors.The last and final section (2002-2021) includes more recent publications on fundamental structural studies, neutron diffraction work on PZT, quantum tunneling and zero-point energy in ferroelectrics, investigations on the anomalous temperature dependence behavior of liquid water and other recent developments.The book will be a useful compendium on ferroelectrics for materials scientists, and/or PhD graduate students on ferroelectrics all around the world.