From the Nile to the Tigris: African Individuals and Groups in Texts from the Neo-Assyrian Empire (State Archives of Assyria Studies) (Paperback) 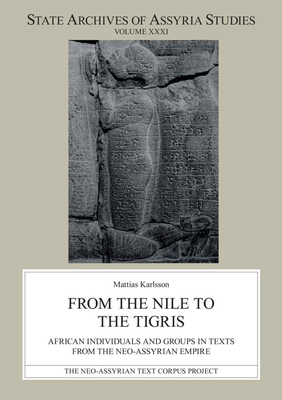 Egypt and Mesopotamia, two cradles of civilization, repeatedly came into contact with each other in antiquity. Interaction between Africa and Mesopotamia was particularly close and frequent in the period when the Neo-Assyrian Empire controlled Egypt (dominated by rulers of Libyan descent) and confronted the kings of Kush (from present-day Sudan). This book seeks to identify Africans--namely, Egyptians, Kushites, and Libyans--in Neo-Assyrian texts from this period, discussing the presence of Africans in the Neo-Assyrian Empire at both individual/biographic and collective/demographic levels and exploring such concepts as ethnicity, multiculturalism, integration, and assimilation.

Mattias Karlsson is a researcher in Assyriology and Egyptology. He is the author of Alterity in Ancient Assyrian Propaganda and Relations of Power in Early Neo-Assyrian State Ideology, the former of which is distributed by Penn State University Press.