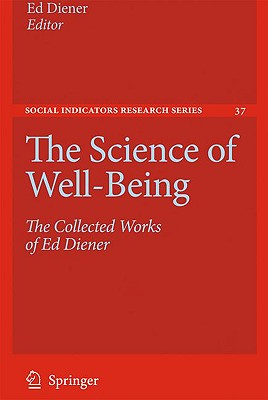 This is book number 37 in the Social Indicators Research series.

Major Theoretical Questions Theories about subjective well-being have grown over the past several decades, but have been re ned only slowly as adequate data have been compiled to test them. We can characterize the theories describing happiness along several dimensions. The rst dimension is whether the theory places the locus of happiness in external conditions such as income and status, as many sociological theories do, or within the attitudes and temperament of the individual, as many psychological theories do. Some have maintained that people adapt to all circumstances over time, so that only individual personality matters for producing happiness, whereas others believe that economicandothersocietalfactorsarethedominantforcesinproducingwell-being. Throughout my writings there is a mix of both the internal and external factors that in uence well-being. A second dimension that characterizes scholarship on well-being is the issue of whether the factors affecting well-being are relative or absolute. That is, are there standards used by people at all times and places in judging their lives and in reacting to events? Or are standards dependent on what other people possess, on expec- tions, andonadaptationlevelsbasedonpastcircumstances?Again, thereisevidence supporting the role of both universal and relative standards. People around the globe are probably in uenced by common factors such as friendship versus loneliness, but even these universal in uences on happiness are probably subject to some degree of comparison depending on what the person is used to and what others have. However, some factors might be much more comparative than other in uences, as Hsee, Yang, Li, and Shen (in press) have describe.

Ed Diener is the Joseph R. Smiley Distinguished Professor of Psychology at the University of Illinois. He received his doctorate at the University of Washington in 1974, and has been a faculty member at the University of Illinois for the past 34 years. Dr. Diener was the president of both the International Society of Quality of Life Studies and the Society of Personality and Social Psychology. Currently he is the president of the International Positive Psychology Association. Dr. Diener was the editor of the Journal of Personality and Social Psychology and the Journal of Happiness Studies, and he is the founding editor of Perspectives on Psychological Science. Diener has over 240 publications, with about 190 being in the area of the psychology of well-being, and is listed as one of the most highly cited psychologists by the Institute of Scientific Information with over 12,000 citations to his credit. He won the Distinguished Researcher Award from the International Society of Quality of Life Studies, the first Gallup Academic Leadership Award, and the Jack Block Award for Personality Psychology. Dr. Diener also won several teaching awards, including the Oakley-Kundee Award for Undergraduate Teaching at the University of Illinois.