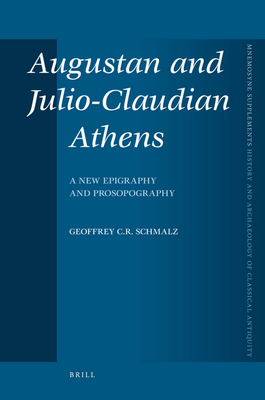 By Geoffrey Schmalz
$212.00
Unavailable, Out of Stock, or Out of Print

While there is now renewed interest in the history of Athens under the Roman empire, the Augustan and Julio-Claudian periods remain relatively neglected in terms of extended study. Thus the only comprehensive historical works on the period and its epigraphy remain those of Paul Graindor, which were published before the discovery of the Athenian Agora and its epigraphical wealth. This study aims to help provide a basis for new research on early Roman Athens, in the form of an epigraphical and historical reference work, in two parts. The Epigraphical Catalogue (Part I) represents both a companion and supplement to the Attic corpus of the Inscriptiones Graecae (Minor Editio) as it pertains to the Augustan and Julio-Claudian period. The Prosopographical Catalogue (Part II) offers an updated prosopography of the period as it relates to the material of the Epigraphical Catalogue. An appendix provides a chronological list of the period's major office-holders, liturgists, and priesthoods.

Geoffrey C. R. Schmalz, Ph.D. (1994) in Classical Art & Archaeology, University of Michigan, is Associate Professor of History and Hellenic Studies at Simon Fraser University. Specializing in the archaeology, epigraphy, and history of Roman Athens and the Greek world under the early Empire, he is presently preparing a companion volume to his present work: Athens after Actium, A Cultural Landscape between Hellenism & Rome, 31 B.C.-A.D.68.