Power and Political Culture in Suharto's Indonesia: The Indonesian Democratic Party (Pdi) and the Decline of the New Order (1986-98) (Hardcover) 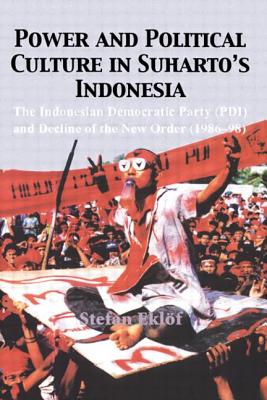 By Stefan Eklof
$85.00
Unavailable, Out of Stock, or Out of Print

Under Indonesia's authoritarian New Order regime, the continued existence of the Indonesian Democratic Party (PDI) was meant to demonstrate the ostensibly democratic character of the regime. In essence, this small nationalist-Christian coalition was meant to fill the role of pliant state corporatist party. From the later 1980s, however, the PDI became more openly critical of government policies and came to stand out as the major proponent of reform within the formal politica system. The government responded in 1996 by engineering the removal of the populat Megwati Sukarnoputri as PDI leader, a move that significantly damaged the popular legitimacy and moral standing of the regime.

Against this background, the book assesses broader questions of political culture, political participation, regime maintenance and opposition in the late Suharto era. The political culture perspective provides a fresh understanding of politics under the New Order and its influence on the systems of power and political relations in post-Suharto Indonesia.