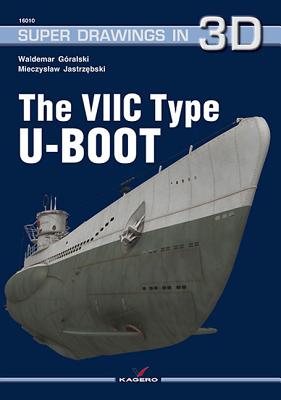 By Waldemar Góralski, Mieczyslaw Jastrzebski
$26.95
Unavailable, Out of Stock, or Out of Print

This is book number 10 in the Super Drawings in 3D series.

The type VIIC was a slightly modified version of the successful VIIB. They had basically the same engine layout and power, but were slightly larger and heavier which made them not quite as fast as the VIIB. 5 torpedo tubes (4 at the bow and one at the stern) were installed in all but the following boats; only two bow tubes (U-72, U-78, U-80, U-554 and U-555) and no stern tube (U-203, U-331, U-351, U-401, U-431 and U-651). The VIIC was the workhorse of the German U-boat force in World War Two from 1941 onwards and boats of this type were being built throughout the war. The first VIIC boat being commissioned was the U-69 in 1940. The VIIC was an effective fighting machine and was seen in almost all areas where the U-boat force operated although their range was not as great as the one of the larger IX types. The VIIC came into service as the "Happy Days" were almost over and it was this boat that faced the final defeat to the Allied anti-submarine campaign in late 1943 and 1944. Perhaps the most famous VIIC boat was the U-96 which is featured in the movie Das Boot, other noticeable boats were the U-flak boats. Many of these boats were fitted with the Schnorkel in 1944-1945. This design saw one more improvement in the type VIIC/41 boat. The larger mine-laying type VIID was a direct variant of the VIIC.