Academic stress as a predictor of depression and suicidal ideation in adolescents, family environment and self-esteem (Paperback) 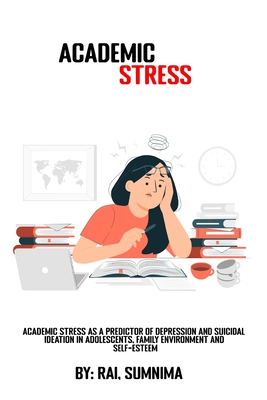 INTRODUCTION Theoretical Background of the Study Adolescence marks a transitional period during which they experience emotional turmoil. The various stages can be divided into the early, middle, and late adolescence marked by significant changes in development as well as in behaviour. Adolescence is a period of extreme vulnerability to risk-taking behaviour due to the complex interaction of senses in context to immature and uncontrollable behavioural abilities typical in this developmental period. Apart from the hormonal changes that mark the beginning of puberty, various factors can affect the emotional status of an adolescent. During this stage, societal norms can cause high disapproval among adolescents and can give rise to risky health behaviours in them. Moreover, academic stress and peer pressure to excel can also affect their emotional well-being as peers play an important role in the emotional and social development of adolescents. Relationships also tend to shape the emotional status of adolescents. During puberty, family relationships undergo reorganization, as teens want independence. This tends to shift them to friendships and social interactions where they value the trust, support, and closeness experienced in romantic relationships. Therefore, the type of environment that family offers plays a crucial role in the emotional development of an adolescent. Therefore, emotional imbalances can make adolescents vulnerable to one of the most crippling disorders called depression. It is one of the major causes of morbidity among adolescents across the world prone to suicide ideation. Academic Stress, Family Environment and Self Esteem as Predictors of Depression and Suicide Ideation 2 Aristotle (1941) described the adolescent stage as being passionate and at the same time divulging in impulsions. Adolescence marks the development of selfcontrol and the capacity to make vital life decisions while transitioning from childhood to adulthood. Plato (1953) described adolescent boys as easily excitable and highly argumentative. Mohanty and Mohanty (1997) explained that adolescence in India is considered as a phase that is difficult to define based on a particular definition of age. Kundu and Basu (1998) have labelled this age of adolescence as being important as this is the period where there is psychological and physical development apart from continuous mental development. The age group for adolescence can be between 11 years to 18 years for females and 12 years to 18 years for males. However, there are other theorists like Mascarenhas (1999) who have classified the age of adolescence between 12 to 20 years and also adds that delayed adolescence can go up to the age of 21 years and in some cases 25 years. He further divides the period of adolescence into three stages: early adolescence falls in the age group of 10 to 12 years; middle adolescence ranges between 12 to 16 years, and late adolescence falls in the age group between 16 years to 19 years. Chandrasekhar (2000) explains adolescence as a period of anxiety and adjustment with the changes that occur at that age. Many factors like family problems and their actions may trigger them towards depression and resort to drugs as a means of escaping from depression and anxiety. Das (2000) in his article said that the term adolescence is derived from the Latin word "adolescere" which translates as "to grow". Das (2000) explains adolescence as a transition period where pubertal maturation can cause changes in the physical, cognitive, social, and intellectual development as well as in personality,