In Search of the Miraculous: Fragments of an Unknown Teaching (Paperback) 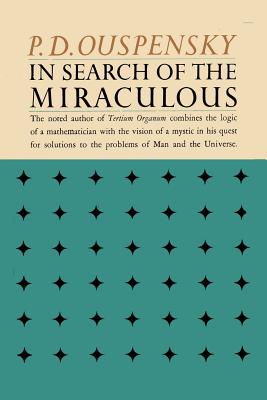 In Search of the Miraculous Fragments of an Unknown Teaching stands as one of the great classic texts of man's eternal search for meaning and being. When Piotr Demianovich Ouspensky (1878-1947) met Gurdjieff in St. Petersburg in 1915, he was uniquely prepared to resonate to the latter's call, and was to become one of the most important people to help spread Gurdjieff's ideas in the world. He was already a popular journalist and accomplished writer who had written several books on esoteric traditions (his seminal Tertium Organum was published in 1912). He had just returned from his own extensive search in the East, where he encountered a number of "teachers" but had not found what he was looking for-an esoteric school, with a genuine teacher. In Gurdjieff he recognized such a teacher, and became a student. Later he distanced himself from Gurdjieff, for reasons that are hinted at in the present book and in other places, but which remain mysterious. Ouspensky himself became an important teacher, in a form derived almost entirely from Gurdjieff. He attracted many students in London, and later in New Jersey where he moved in 1941. He continued to work on the extensive notes he had made during his period studying directly with Gurdjieff (1915-1924). Shortly before he died, he finished the present book, which was based on these notes.