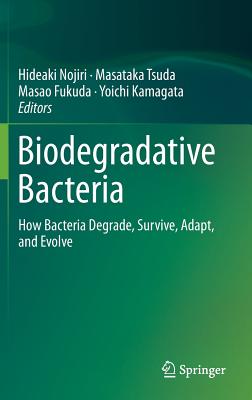 Biodegradative Bacteria highlights the novel nature of bacterial cell functions in the field of biodegradation by putting them into three parts: (1) Genetic and genomic systems, (2) Degradative enzyme systems, and (3) Bacterial behavior in natural environmental systems. The first part of the book includes cell functions as degradative machinery, genome systems for effective degradation, and the evolution of degradative systems by mobile genetic elements. The second part deals with the structure, function, evolution, diversity, and application of degradative and related enzymes. The third part presents cell or genomic behaviors of biodegradative bacteria in natural ecosystems.

Bacterial metabolic capacity, which plays an important role in the global material cycle, contributes significantly to the buffering capacity for the huge and unintended release of various chemicals. Recently, however, the prosperity and globalization of material civilization has led not only to severe local contamination by hazardous chemicals, but also to continuous increment of contaminant concentrations worldwide. To solve such urgent global issues, bacterial functions that are involved in biodegradation of hazardous chemicals have been analyzed. The term "biodegradative bacteria" refers to those bacteria that have the ability to degrade such xenobiotic (man-made) and/or hazardous chemicals. Analyses of biodegradative bacteria include diverse areas of study, such as genetics, enzymology, genomics, cell physiology, ecology, and evolutionary biology. In other words, the targets investigated in research on biodegradative bacteria include single molecules, single cell systems, bacterial consortia (interaction with surrounding microorganisms), and interaction with surrounding biotic and abiotic materials. Such complexity makes the research on biodegradative bacteria difficult but quite interesting.