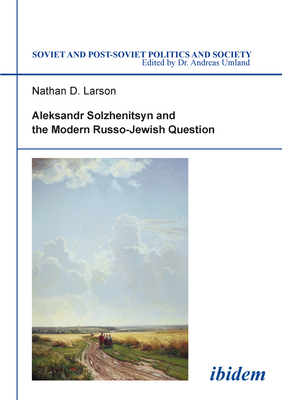 Will the Russian and Jewish nations ever achieve true reconciliation? Why is there such disparity in the interpretations of Russo-Jewish history? Nobel Laureate Aleksandr Solzhenitsyn has focused on these and other thorny questions surrounding Russia's Jewish Question for the last ten years, culminating in a two-volume historical essay that is among his final literary offerings: Two Hundred Years Together. In this essay, Solzhenitsyn seeks to elucidate Judeo-Russian relations while also promoting mutual healing between the two nationalities, but the polarized reception of Solzhenitsyn's work reflects the passionate sentiments of Jews and Russians alike. Aleksandr Solzhenitsyn and the Modern Russo-Jewish Question puts Two Hundred Years Together within the context of anti-Semitism, nationalism, Russian literature, and Aleksandr Solzhenitsyn's prolific, influential life. Nathan Larson argues that as a writer, political thinker, and religious voice, Solzhenitsyn symbolizes Russia's historically ambivalent relationship vis- -vis the Jewish nation.

Nathan Larson, MPhil, studied Russian Politics and Literature at the University of Oxford, St. Antony's College. Larson has lived and studied extensively in Russia and the Caucasus. He is interested in the relationship between political history and literature.