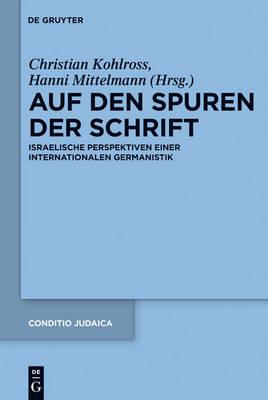 By Hanni Mittelmann (Editor), Christian Kohlroß (Editor)
This Book Is Not Sold Online - Inquire In Store

This is book number 80 in the Conditio Judaica series.

This book-series, initiated in 1992, has an interdisciplinary orientation; it is published in English and German and comprises research monographs, collections of essays and editions of source texts dealing with German-Jewish literary and cultural history, in particular from the period covering the 18th to 20th centuries.

The closer definition of the term German-Jewish applied to literature and culture is an integral part of its historical development. Primarily, the decisive factor is that from the middle of the 18th century German gradually became the language of choice for Jews, and Jewish authors started writing in German, rather than Yiddish or Hebrew, even when they were articulating Jewish themes. This process is directly connected an historical change in mentality and social factors which led to a gradual opening towards a non-Jewish environment, which in its turn was becoming more open. In the Enlightenment, German society becomes the standard of reference - initially for an intellectual elite. Against this background, the term German-Jewish literature refers to the literary work of Jewish authors writing in German to the extent that explicit or implicit Jewish themes, motifs, modes of thought or models can be identified in them.
From the beginning of the 19th century at the latest, however, the image of Jews in the work of non-Jewish writers, determined mainly by anti-Semitism, becomes a factor in German-Jewish literature. There is a tension between Jewish writers' authentic reference to Jewish traditions or existence and the anti-Semitic marking and discrimination against everything Jewish which determines the overall development of the history of German-Jewish literature and culture. This series provides an appropriate forum for research into the whole problematic area.