Before Babel: The Crystal Tongue (Paperback) 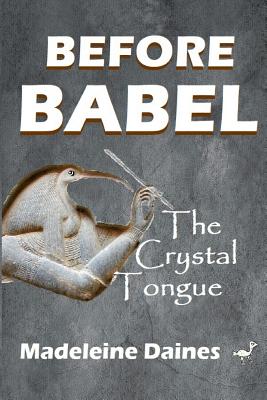 Images of over 150 of the original pre-cuneiform Sumerian symbols are shown in BEFORE BABEL THE CRYSTAL TONGUE, many of them discussed individually and in context. Explaining the source of ancient place names and mythological beings - Babel, Harran, Gobekli Tepe, Greek Prometheus, Talon and others - the book demonstrates how to read the sacred language of Sumer where the placing of each symbol follows rules not found in modern grammar books. It can be likened to a game, a code, sometimes a riddle. This is the language of an age-old civilisation. At its heart sits a Great Magician known to the world as Hermes Trismegistus and assimilated to Egyptian Thoth. He too will offer up the source of his name, leading us to a better understanding of the most noteworthy of magic symbols and giving a few unique glimpses into age-old knowledge.

BEFORE BABEL THE CRYSTAL TONGUE is a language book unlike any other, with its ancient doors creaking open on to unexplored avenues. In many of the words we still use unthinkingly today lies dormant the magic of what was once a worldwide common language, the language of the Matriarch, language of the birds, the Crystal Tongue. The re-translation of the oldest Sumerian literary text renamed THE STORY OF SUKURRU is included.