H. P. Lovecraft: Against the World, Against Life (Hardcover) 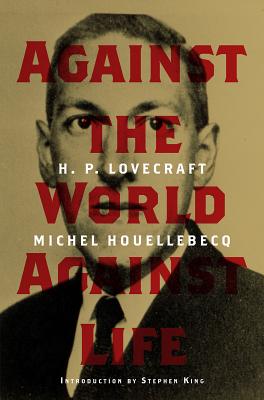 Part biographical sketch, part pronouncement on existence and literature, the best-selling French novelist Michel Houellebecq's H. P. Lovecraft: Against the World, Against Life, was published in France in 1991 and is the first non-fiction text ever published by the author.
Here, France's most famous contemporary author praises his prewar American alter ego’s style, which couldn't be less like his own.
With a foreword by Lovecraft admirer Stephen King, this eloquently translated edition is an insightful introduction to both Lovecraft’s dark mythology and Houellebecq’s deadpan prose.

Michel Houellebecq is a French author, poet and filmmaker whose work exposes his humorous yet misanthropic view on humanity. He is known as one of the best and most-loved French novelists.
Stephen King is the best-selling American novelist known for horror hits including Carrie, The Shining, and It.

"...publisher SelfMadeHero collected four of Culbard’s Lovecraft adaptations—The Dream-Quest of Unknown Kadath, The Case of Charles Dexter Ward, At The Mountains of Madness and The Shadow Out of Time—into one handsome oversized volume, which makes an equally splendid gift to the Lovecraft devotee in your life..."