Flying With Dad: A Daughter. A Father. And the Hidden Gifts in His Stories from World War II. (Hardcover) 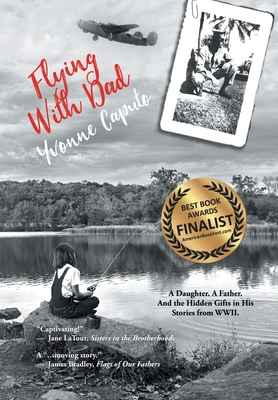 Written with vivid detail, this encouraging, life-giving book is a tale of a World War II Veteran father and his daughter, who found the relationship with him she'd always longed for.

Do you have a family member who served in the military, who perhaps saw war, and wondered what their experience was really like? Do you suspect there are past traumas that might be affecting their ability to open up? Do you wish you could feel closer and more connected to your mom, dad, or other family members? If yes, Flying with Dad will pull you into a real-life story that shows you how.

At age ten, Yvonne vied for her dad's attention. At twenty, they fought about race. At sixty, she struggled to talk with him about what mattered.

In Flying With Dad, Caputo charts her journey to her father through the re-telling of why he went from repairing planes to being a B-24 navigator in WWII, how heavy German flak led to post-war nightmares, and why he suffered years of guilt after one particular bombing run over Unterschlauersbach, Germany.

Over the years, Yvonne would ask her father questions about this past. She'd listen, pay attention, and found that he was paying attention to her as well. As she learned to meet him where he was, instead of where she wanted him to be, the result was an intimacy, a deep abiding respect, and a no-regrets final goodbye.

Flying with Dad is a heart-wrenching and heart-warming story of a daughter striving to understand her father and him opening up about the experiences that shapes so many soldiers and can get in the way of the rich relationships they and their children deserve.