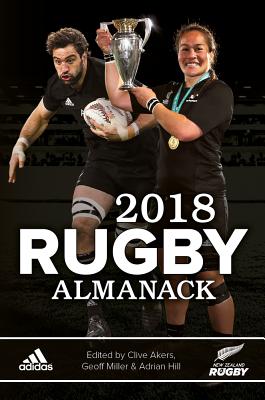 By Clive Akers, Geoff Miller, Adrian Hill
$36.95
Unavailable, Out of Stock, or Out of Print

The Rugby Almanack is the world’s longest running rugby book of record. It was first published in 1935 to cover the previous season’s first-class rugby in New Zealand. Since then it has been published uninterrupted (apart from two combined issues during World War II). Now in its 82nd edition, the 2018 Rugby Almanack records another huge year, including the British and Irish Lions in New Zealand, the All Blacks in the Rugby Championship and the Bledisloe Cup, plus Super Rugby, Mitre 10 Cup and Mitre 10 Championship and a full summary of women’s rugby.

Clive Akers, Geoff Miller, and Adrian Hill are New Zealand’s foremost rugby historians and statisticians. Akers has been a co-editor of the Almanack since 1995. He was joined in 1999 by Geoff Miller, who is statistician for the NZRU. In 2016 Adrian Hill joined Clive and Geoff as a co-author.