Wherever I Find Myself: Stories by Canadian Immigrant Women (Paperback) 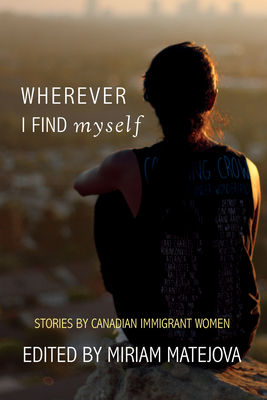 By Miriam Matejova
$24.95
Unavailable, Out of Stock, or Out of Print

An anthology of Canadian immigrant women and their experiences of being caught between the world of their past and the world of their future.Edited by Miriam Matejova, WHEREVER I FIND MYSELF is a diverse collection of stories about the joys and struggles of immigrant women living in Canada. Often bringing with them the shadow of war and the guilt of leaving, the women in this new anthology expose their emotional pain but also their gratitude for being able to call Canada home. Their stories paint touching and charming portraits of cultural and linguistic misunderstandings, bureaucratic hurdles, attempts to navigate unfamiliar landscapes, and a desire to be accepted despite differences in accent, skin colour, or taste in food. Together they form a mosaic of emotions and worldviews that underline the immigrant condition for women. A yellow dress with ruffles, a kind Grade 1 teacher with a surname that's difficult to spell, cockroaches in the bathroom, the contempt of strangers, and Whitney Houston on the radio-a Filipino woman recalls her experience as a six-year-old immigrant in a ghetto in Mississauga in the 80s. Browsing through a Polish fashion magazine at a European deli, a woman sees herself in an alternative universe of what her life might have been had she never immigrated to Canada. A same-sex couple moves from Minnesota to Ontario to find refuge for their love, but first they must drive a seventeen-foot truck through a blizzard and make it through the frustrating net of Canadian bureaucracy. In search of her origins, a Jewish woman travels to her birthplace in Passau, Germany. There, among rows of European picturesque houses and foreign tombstones of a Jewish cemetery, she finds no memories, only the shadow of Hitler and the ghosts of her parents. Through these stories of courage, aloneness, and hope, new and established writers reach out to both immigrants and those whose families long ago ceased to identify with the immigrant label. Through their struggles and, at times, endearingly critical looks at Canada, they remind us that many of our perceived divisions are nothing but artificial creations of mind and that all of us are past, current, or potential immigrants.

Miriam Matejova is a writer and researcher, currently pursuing a PhD in Political Science at the University of British Columbia in Vancouver. Originally from Bratislava, Slovakia, Miriam has moved to Canada as a young adult in pursuit of higher education. Although Canada has been her home for over a decade now, Slovakia has stayed in her heart as well as in her creative writing. Her work has appeared in THE GLOBE AND MAIL, HER CIRCLE, THE INCONSEQUENTIAL, and several travel magazines. Her story "Proti Komu" ("Against Whom") has been published in a Slovak anthology of award-winning fiction. She is also one of the contributors to Caitlin Press' THIS PLACE A STRANGER: CANADIAN WOMEN TRAVELLING ALONE.

"This book is perfect for anyone interested in modern-day Canadian history, new immigrants, people who remember relocating during this lifetime, and people interested in the experiences of those who arrived here more recently than they. I can also imagine this book being discussed in book clubs." — Taslim Jaffer, Surrey604

"As a second-generation Chinese immigrant, I found my attention was held cover to cover. I wanted desperately to find something out of place in this anthology, something lacking or left unsaid. Instead, the authors of these essays spoke honestly and with deeply powerful voices about a process that has been both central to my own being and that has too often been obscured from my learning. Wherever I Find Myself creates a space for reflection on the experiences of my own family and on how immigration shaped and continues to shape me." — Gillian Der, The Ormsby Review