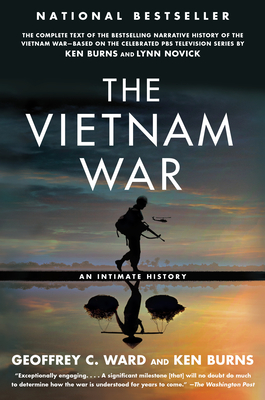 More than forty years have passed since the end of the Vietnam War, but its memory continues to loom large in the national psyche. In this intimate history, Geoffrey C. Ward and Ken Burns have crafted a fresh and insightful account of the long and brutal conflict that reunited Vietnam while dividing the United States as nothing else had since the Civil War. From the Gulf of Tonkin and the Tet Offensive to Hamburger Hill and the fall of Saigon, Ward and Burns trace the conflict that dogged three American presidents and their advisers. But most of the voices that echo from these pages belong to less exalted men and women—those who fought in the war as well as those who fought against it, both victims and victors—willing for the first time to share their memories of Vietnam as it really was. A magisterial tour de force, The Vietnam War is an engrossing history of America’s least-understood conflict.

Geoffrey C. Ward, historian and screenwriter, wrote the script for The Vietnam War series and is the author of nineteen books, including A First-Class Temperament: The Emergence of Franklin Roosevelt, which won the National Book Critics Circle Award and the Francis Parkman Prize, and was a finalist for the Pulitzer Prize. He has written or cowritten many documentary films, including The War, The Civil War, Baseball, The West, Mark Twain, Not for Ourselves Alone, and Jazz.

Ken Burns, the producer and director of numerous film series, including The War and Country Music, founded his own documentary film company, Florentine Films, in 1976. His landmark film The Civil War was the highest-rated series in the history of American public television, and his work has won numerous prizes, including the Emmy and Peabody Awards, and two nominations for the Academy Award. He lives in Walpole, New Hampshire.

“Exceptionally engaging. . . . A significant milestone [that] will no doubt do much to determine how the war is understood for years to come.” —The Washington Post

“Stunning. . . . The best single-volume history of the war. . . . Assembled from a multitude of overlapping voices, American and Vietnamese, [The Vietnam War] tells the long story from every conceivable angle, from veterans and protesters to draft-dodgers and prisoners of war to politicians and grunts.” —Philadelphia Inquirer