A Dream About Lightning Bugs: A Life of Music and Cheap Lessons (Hardcover) 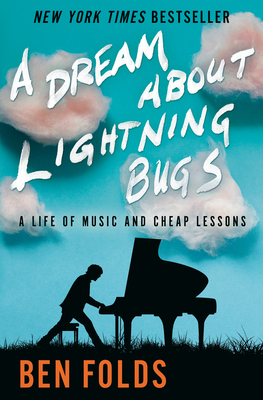 NEW YORK TIMES BESTSELLER • From the genre-defying icon Ben Folds comes a memoir that is as nuanced, witty, and relatable as his cult-classic songs.

“A Dream About Lightning Bugs reads like its author: intelligent, curious, unapologetically punk, and funny as hell.”—Sara Bareilles

Ben Folds is a celebrated American singer-songwriter, beloved for songs such as “Brick,” “You Don’t Know Me,” “Rockin’ the Suburbs,” and “The Luckiest,” and is the former frontman of the alternative rock band Ben Folds Five. But Folds will be the first to tell you he’s an unconventional icon, more normcore than hardcore. Now, in his first book, Folds looks back at his life so far in a charming and wise chronicle of his artistic coming of age, infused with the wry observations of a natural storyteller.

In the title chapter, “A Dream About Lightning Bugs,” Folds recalls his earliest childhood dream—and realizes how much it influenced his understanding of what it means to be an artist. In “Measure Twice, Cut Once” he learns to resist the urge to skip steps during the creative process. In “Hall Pass” he recounts his 1970s North Carolina working-class childhood, and in “Cheap Lessons” he returns to the painful life lessons he learned the hard way—but that luckily didn’t kill him.

In his inimitable voice, both relatable and thought-provoking, Folds digs deep into the life experiences that shaped him, imparting hard-earned wisdom about both art and life. Collectively, these stories embody the message Folds has been singing about for years: Smile like you’ve got nothing to prove, because it hurts to grow up, and life flies by in seconds.

Praise for A Dream About Lightning Bugs

“Besides being super talented, and an incredibly poignant and multifaceted musician, Ben Folds is a fantastic author. I couldn’t put this book down—and not just because I taped it to my hand. Ben takes us into his mind and into his process from the very beginnings of his childhood to where he is today—one of the greatest musicians and writers that has ever graced the art.”—Bob Saget

Ben Folds is an American musician who has created an enormous body of genre-bending music that includes pop albums with Ben Folds Five, multiple solo albums, a classical piano concerto, and collaborations with artists ranging from Regina Spektor to William Shatner. Folds, who was also a judge for five seasons on NBC’s acclaimed a capella show The Sing-Off, was named the first ever artistic advisor to the National Symphony Orchestra at the Kennedy Center in 2017. He is an outspoken champion for arts education and music therapy, serving on the distinguished Artist Committee of Americans for the Arts, and as chairman of the national ArtsVote 2020 initiative.

“A Dream About Lightning Bugs is an insightful, touching and often hilarious look back at [Folds’s] life and career, told with wit and good old-fashioned Southern warmth—like Truman Capote, but with more F-bombs.”—People

“A Dream About Lightning Bugs offers a glimpse inside the head of another musical genius while also being one of the best-written, most interesting musical memoirs of the rock era.”—Pittsburgh Post-Gazette

“A masterfully written memoir, and so much more. Folds imbues this literary work with keen insight and humor to create an elegant and moving tribute to art and life itself.”—Daniel Levitin, author of #1 New York Times bestseller This Is Your Brain on Music and The Organized Mind

“Delightful . . . Singer-songwriter Folds explores the ways in which music shaped his life and offers glimpses into the process of making music. . . . Folds’s fans will take great pleasure in this charming and insightful memoir.”—Publishers Weekly

“Engaging and solid . . . Rock memoirs have a distancing effect, but Ben Folds is as relatable as ever.”—The Washington Post

“[Folds’s] journey, beginning with a dream he had at age three, is one of the most rewarding any musician has brought us along for in quite some time.”—Paste Magazine

“A Dream About Lightning Bugs . . . radiates [Folds’s] goofy, brilliant, genuine, deeply empathetic spirit, marked by the kind of amiable self-consciousness with which unboastful genius often shades itself from the harsh stage-glare of attention.”—Maria Popova, Brain Pickings