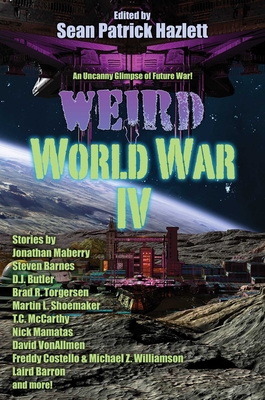 NEW STORIES OF FUTURE WARFARE FROM THE HOTTEST NAMES IN SCIENCE FICTION, FANTASY, AND HORROR

TALES OF THE WAR BEYOND THE NEXT

What if there were a war after Armageddon? How would the survivors emerging from World War III’s radioactive slag heaps fight in this conflict? Would they wage it with sticks and stones . . . and sorcery? Or would they use more refined weapons, elevating lawfare to an art and unleashing bureaucratic nightmares worse than death? Would they struggle against themselves or inter-dimensional invaders? What horrors from the desolate darkness might slither into the light? Wipe away the ashes of civilization and peer into a pit of atomic glass to witness the haunting visions of World War IV from today’s greatest minds in science fiction, fantasy, and horror.

"Hazlett follows Weird World War III by looking even further into the future at the war after the next big one... the sheer weirdness of many of these pieces is a testament to the genre’s creativity and verve." —Publishers Weekly

"Stories in this anthology range from dystopian in nature to hard-core sci-fi... With the diversity of authors in this collection, the stories cover a wide range of genres, viewpoints, and styles. This book has it all... There is a short story for just about any type of audience. Come take a look at the absurdity of future wars."—Manhattan Book Review

"Although this might seem to be a limited theme, the various authors have risen to the challenge, and produced a wide variety of fiction incorporating science fiction and fantasy concepts into tales of struggles that do not always take place on battlefields."—Tangent Online

"This book raises questions about who has access to what technology and to what ends that technology is used. In some of these stories, there is a philosophical core that makes the heart-thumping action all the more meaningful... Much like the previous anthology, I enjoyed it quite a lot."—Never Was Magazine

"Weird World War III stokes our collective fears with tales of worst-case scenario nightmares by some of the best writers in the business."—This Is Horror UK

"A collection that runs the gamut in terms of what it does with the premise."—Sea Lion Press

"Weird World War III is a buffet of war-related speculative fiction, guaranteed to entertain anyone who likes destroying humanity. Who would have known that blasting this species to Kingdom Come could be so fun?"—Never Was Magazine

Sean Patrick Hazlett is an Army veteran, speculative fiction writer and editor, and finance executive in the San Francisco Bay area. He holds an AB in history and BS in electrical engineering from Stanford University, and a master’s degree in public policy from the Harvard Kennedy School of Government. As a cavalry officer serving in the elite 11th Armored Cavalry Regiment, he trained various Army and Marine Corps units for war in Iraq and Afghanistan. Sean is a 2017 winner of the Writers of the Future Contest. More than forty of his short stories have appeared in publications such as The Year’s Best Military and Adventure SF, Year’s Best Hardcore Horror, Terraform, Galaxy’s Edge, Writers of the Future, Grimdark Magazine, Vastarien, and Abyss & Apex, among others. He is an active member of the Horror Writers Association and Codex Writers’ Group. Hazlett’s award-winning short story “Adramelech” appeared in the Wall Street Journal best-selling anthology Writers of the Future: Volume 33.