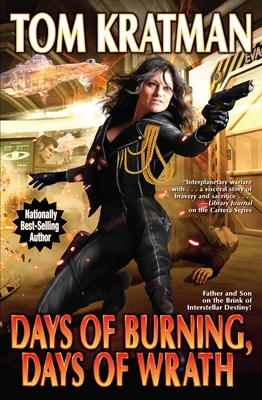 This is book number 8 in the Carrera series.

When Patricio Carrera’s family was murdered by Salafist terrorists aided and abetted by the fleet of alien Earth, the only restraint on his ruthlessness and ambition was also removed. Now, after decades of war and preparation for war in his adopted homeland of Balboa, the last of the Tauran Union Expeditionary Force collapses and is herded into prison camps and ships, where their re-education commences.

An Islamic rebellion explodes inside the Tauran Union, bringing the governments and the bureaucracies to their knees . . . except when they’re hauled up by their necks on lampposts. In neighboring Santa Josefina, the Taurans’ Task Force Jesuit is pinned into one small corner of the country, helplessly awaiting destruction. At sea, the Balboan classis and the remaining fleet of the Zhong Hegemony battle for the supply lines that keep the invading Zhong Army in Balboa alive, while the legions, now rid of the Taurans, redeploy against the Zhong, vengeance and massacre in their hearts and minds. And finally, Hamilcar Carrera, Patricio’s young son, stands poised on the bridge of a clandestine assault transport, ready to obliterate the last enemy base on his planet, even as a small ship is poised to remove the alien interstellar fleet overhead.

About the Carrera series:

“[I]nterplanetary warfare with . . . [a] visceral story of bravery and sacrifice . . . fans of the military SF of John Ringo and David Weber should enjoy this SF action adventure.”—Library Journal

“Kratman raises disquieting questions on what it might take to win the war on terror . . . realistic action sequences, strong characterizations, and thoughts on the philosophy of war.”—Publishers Weekly

"[Baen publisher] Toni [Weisskopf] and I disagree about everything except about how good his books are."—John Birmingham

Carrera Series:
A Desert Called Peace
Carnifex
The Lotus Eaters
The Amazon Legion
Come and Take Them
The Rods and the Axe
A Pillar of Fire by Night
Days of Burning, Days of Wrath

In 1974, at age seventeen, Tom Kratman became a political refugee and defector from the PRM (People’s Republic of Massachusetts) by virtue of joining the Regular Army. He stayed a Regular Army infantryman most of his adult life, returning to Massachusetts as an unofficial dissident while attending Boston College after his first hitch. Back in the Army, he managed to do just about everything there was to do at one time or another. After the Gulf War, with the bottom dropping completely out of the anti-communist market, Tom decided to become a lawyer. Every now and again, when the frustrations of legal life and having to deal with other lawyers got to be too much, Tom would rejoin the Army (or a somewhat similar group, say) for fun and frolic in other climes. His family, muttering darkly, put up with this for years. He no longer practices law, instead writing full-time for Baen. His novels for Baen include A State of Disobedience, Caliphate, and the series consisting of A Desert Called Peace, Carnifex, The Lotus Eaters, The Amazon Legion, Come and Take Them, The Rods and the Axe, and A Pillar of Fire by Night. He has written novels with John Ringo: Watch on the Rhine, Yellow Eyes, and The Tuloriad. Also for Baen, he has written the first three volumes of the modern-day military fiction series Countdown.