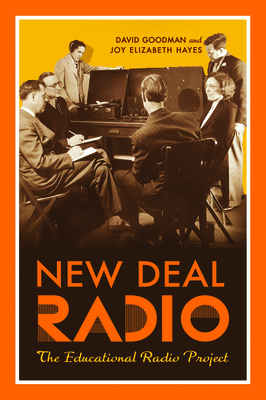 New Deal Radio examines the federal government's involvement in broadcasting during the New Deal period, looking at the U.S. Office of Education's Educational Radio Project. The fact that the United States never developed a national public broadcaster, has remained a central problem of US broadcasting history. Rather than ponder what might have been, authors Joy Hayes and David Goodman look at what did happen. There was in fact a great deal of government involvement in broadcasting in the US before 1945 at local, state, and federal levels. Among the federal agencies on the air were the Department of Agriculture, the National Park Service, the Works Progress Administration (WPA) and the Federal Theatre Project.

Contextualizing the different series aired by the Educational Radio Project as part of a unified project about radio and citizenship is crucial to understanding them. New Deal Radio argues that this distinctive government commercial partnership amounted to a critical intervention in US broadcasting and an important chapter in the evolution of public radio in America.

DAVID GOODMAN is professor of history at the University of Melbourne in Australia. He is the author of Gold Seeking: Victoria and California in the 1850s and Radio’s Civic Ambition: American Broadcasting and Democracy in the 1930s.

JOY ELIZABETH HAYES is associate professor of communication studies at the University of Iowa, Iowa City. She is the author of Radio Nation: Communication, Popular Culture and Nationalism in Mexico and co-editor of War of the Worlds to Social Media: Mediated Communication in Times of Crisis.

“In their insightful and lively account of the long-neglected history of the Educational Radio Project, David Goodman and Joy Elizabeth Hayes have illuminated one of the major 'missing links' of American radio history, radio’s unique role in the nexus of education, and civic culture during a crucial period of upheaval, as well as the innovative cast of characters behind its development.”
— Michele Hilmes

"The rise and demise of the Educational Radio Project has much to teach us today about the challenges facing public media in the United States and how the determined efforts of activists a century ago demanded a public-interest broadcast culture.”
— Derek Vaillant

“Hayes and Goodman's timely examination of educational broadcasting—and the government interventions that made it possible—holds key lessons for confronting media-related challenges facing us today.”
— Victor Pickard