My Journey with Bernie: The Revolution Starts with Us (Paperback) 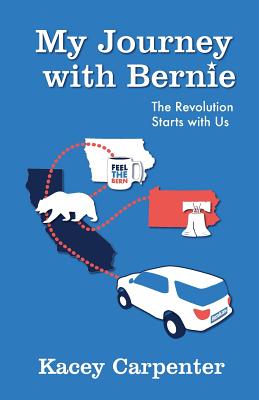 Lessons learned and uplifting stories of grassroots progressives during the 2016 Presidential election, at caucuses and primaries, and conventions on the front-lines of a new political revolution.

In My Journey with Bernie, Kacey Carpenter shares his personal story and lessons learned from people he met during the campaign, at caucuses and primaries, and conventions. Along his journey, he gains trust in the power of people with renewed optimism for "A Future to Believe In."

"Look it's not about me, it's about us, and when we stand together we can do anything," Bernie Sanders tells the volunteers at the Reno Rally in December 2015, pointing his finger directly at me, Kacey recalls, urging all of us to do more. "At that moment, Kacey says, "I feel the Bern."

Soon, he is co-leading 300 people from 30 states to go to Iowa for the first Democratic Party caucus to begin a journey traveling around the country and the world.

My Journey with Bernie is an adventure and reads like a "roller coaster ride" with incredible highs, steep drops, and lows with inspirational, uplifting stories about the people who are bringing enthusiasm, hope, and leading a new political revolution.

Kacey Carpenter is a community organizer, volunteer, technology innovator, parent, and author. He served as a Bernie Sanders delegate at the 2016 Democratic National Convention and as a volunteer to get out the vote in California and ten other states, including co-leading 300 people from 30 states to Iowa. Kacey's journey with Bernie inspired him to continue to fight for the people. He formed NorCal4Bernie, leads NorCal4OurRevolution, ran for Mountain View City Council, helped pass Measure V for rent stabilization, is an elected California Democratic Party Assembly Delegate (AD24), and co-chairs the Bayshore Progressive Democrats club. With a career spanning three decades in the technology industry, he led global teams focused on the intersection of technology innovation and public sector transformation. He collaborated with local, state, and national government organizations leading initiatives for healthcare, justice, community policing, and smart communities around the world. He holds an MBA from The Wharton School of The University of Pennsylvania and a Bachelor of Science degree from UCLA. He has a passion for life, family, friends and loves the outdoors biking, hiking, kayaking, traveling, and volunteering. He lives in northern California.