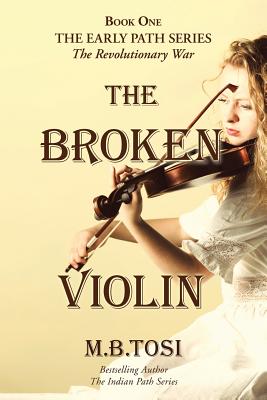 In The Broken Violin, Abigail Bosworth's life is drastically changed when her wealthy British family flees Philadelphia in 1769. Anti-British sentiment is growing, and the Revolutionary War will soon erupt. After Abigail's father closes his shipping business, they move to the Mohawk Valley in rural New York state and join a settlement of German Palatines, which is the nationality of Abigail's mother. To blend into the small village of Stone Arabia, Abigail's father opens an apothecary like his father in England, and Abigail becomes his assistant, an uncommon role for a woman in the late 1700s.
Though life is momentarily calm, Abigail misses a Philadelphia friend she had hoped to marry. As the American rebellion begins growing, he joins a militia and vanishes. With war on the horizon, Abigail's parents die in a heartbreaking accident, and she struggles to live alone. Her fears increase as local Mohawk folk hero, Joseph Brant, joins the British in terrorizing nearby villages. As the Revolutionary War officially begins, Abigail is forced to tackle life's challenges head-on, even the possibility of her own death. Although mocked and plotted against, Abigail prevails and finds love in the most unexpected place.
"M.B. Tosi begins a new series with The Broken Violin, an exciting story of the Revolutionary War. As with all of her books, this one is alive with adventure, genuine history, difficult decisions and faith. Enjoy "
-- Jim Langford,
Director Emeritus of University of Notre Dame Press