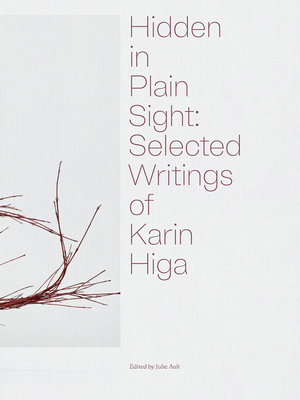 Edited by artist, curator, writer and editor Julie Ault, Hidden in Plain Sight brings together essential writings by the trailblazing art historian and curator Karin Higa (1966-2013). The selected essays, written between 1992 and 2011, focus on the forced evacuation of Japanese Americans in Western US states to specially constructed concentration camps, the artistic production and communities that took root within them and the individual and collective narratives of Asian American artists amid discriminatory policies, restricted political agency and racism. While exploring issues of identity and immigration, Higa recuperates significant artists and oeuvres from historical neglect and engages contemporary artists to examine how art acts as a source for and transmitter of cultural identity.
This book reveals how Higa's conviction that art and lived experience are indissolubly linked was at the root of her methodological modeling of an Asian American art history. Moving between portrayals of artists' networks in the camps and Little Tokyo communities and case studies of oeuvres and biographies, Higa recovers vital art practices and hidden histories of creative struggle and efflorescence. In the process, she maps--across ethnic, geographic, and stylistic boundaries--the fertile creative milieux of individual practices and communities. Higa shows how artists of Asian descent have negotiated the divide between the United States and their ancestral homes by using their freedom as artists to define their culture more broadly.