A Small Catechism for Catholics (Paperback) 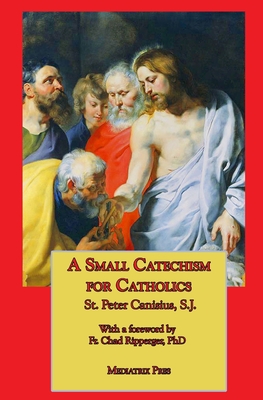 St. Peter Canisius is perhaps the sole reason there is a Catholic Church in Germany, even today. Born in Holland, he was a law student and eventually a Canon of a Cathedral in Germany when he heard the preaching of St. Peter Faber, one of the first companions of St. Ignatius of Loyola. Immediately, Canisius knew his vocation and entered the Society of Jesus. Although he wasn't among the original companions of St. Ignatius, nevertheless, he was one of the first Jesuits, and the most famous.

Apart from laboring for the faith in Germany and Switzerland, he was the first Jesuit to produce any major theological works, and wrote this great Catholic Catechism.

Surprisingly, in the 16 century the the Church had not yet produced a Catechism to compete with the protestants. She had not yet even produced her own edition of the Latin Bible. The Church was slow to pick up on the new technology of printing, and Protestants since the late 1520s, had already produced bibles, tracts and catechisms. Canisius, remarkably and single handedly, challenged and surpassed a generation of Protestant literary output in Germany, holding that just as truly as St. Francis Xavier converted so many in the East, it was a Catholic's duty to labor likewise for the faith in Europe. As we noted above, he produced the first Catholic Catechism. This was the Summa Doctrinae Christianae, (Summary of Christian Doctrine), which was a magnum opus in multiple volumes meant for clergy and laymen. He produced a second directed to young men, the Catechismus Minor (Smaller Catechism), which is an abridgment of the multivolume Summa Doctrinae Christianae. Later, he produced a third Catechism, the Parvus Catechismus Catholicorum (Small Catechism for Catholics) which makes up the present work. St.Peter Canisius produced this work for young children between 9 and 14 years of age. This remains true of this translation, though certainly adults could benefit from its clear presentation and faithfulness to Apostolic Tradition.

Therefore, the answers to the questions are more simple than in other Catechisms.This work has not been in English for several hundred years, and in that time there have been other Catechisms, notably the Baltimore, which are familiar to Catholics. In translating from the Latin, I have taken great care to remain true to the exact formulation of the questions and answers, so as not to lose any of the doctrinal content of the original. For common prayers such as the Our Father and the Hail Mary, I have preserved the standard form Catholics use when praying these prayers. There is an appendix of scripture references which support Catholic doctrine at the end of the work without any commentary, which Canisiu sarranged for youths to memorize in order to defend the faith when challenged. For these references I have used the Douay-Rheims version, in spite of its shortcomings with respect to modern English readability, because it is the closest version to the vulgate, the basis for Cansisius' work and the common point of reference for both Catholics and Protestants at that time.

This work may prove easier to understand and can work in tandem with other Catechisms, and additionally, was produced by a saint and doctor of the Church. Canisius' reach was so powerful through the centuries in Germany, that Pope Benedict XVI said "Still in my father's generation, people called the catechism simply the Canisius: He is really the catechist of the centuries; he formed people's faith for centuries."

This new translation, contains some beautiful artwork from the Netherlands, in honor of Canisius' birth place, and a foreword by Fr. Chad Ripperger, PhD.