The Salem Witch Hunt: A Captivating Guide to the Hunt and Trials of People Accused of Witchcraft in Colonial Massachusetts (Paperback) 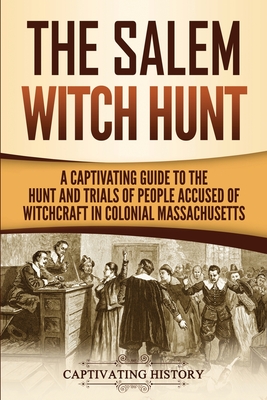 If you want to discover the captivating history of the Salem Witch Hunt, then keep reading...

Decades after witch-hunting had begun to die down in Europe, North America was about to witness its bloodiest witch hunt in history. The Massachusetts of 1692 was a very different one to the state we know today. Populated by colonists, many of them a generation or less from life in an England bathed in religious turmoil, Massachusetts was not the safe haven that the fleeing Puritans had hoped it would be. Persecuted for their faith in Europe, the Puritans had pictured a kind of utopia founded on biblical principles. They saw the New World as a new beginning, a kind of second chance for humanity. It would be only 72 years after the arrival of the Mayflower that the events in Salem would make it blatantly obvious that humanity had already blown it again.

This is not the story of the trials. This is the story of its people. This is not an attempt to explain the events of 1692. It is an attempt to bring to life the victims who died so unjustly. In this book, we will walk side by side with the destitute Sarah Good as she realizes that after having lost all she owns, her reputation, her baby, and even her life will still be taken from her. We stand at the bar with Rebecca Nurse, a sweet little old lady who is sentenced to hang for what she must have perceived to be the most heinous of crimes. We witness George Burroughs at the gallows, a former minister now condemned to die for his supposed alliance with Satan, as he delivers a speech so stirring that it takes quick thinking from his enemies to prevent the crowd from rushing forth to cut him down. We feel our own breaths catching as we watch the cruel and greedy Sheriff George Corwin piling rocks onto the fragile eighty-year-old body of Giles Corey, who is determined to die without entering a plea so that his sons will still get the inheritance he promised them.

We will walk through this history in the footprints of those who suffered the hardest in it. The Salem witch hunt and trials killed many and ruined the lives of countless others. And this is their story.

In The Salem Witch Hunt: A Captivating Guide to the Hunt and Trials of People Accused of Witchcraft in Colonial Massachusetts, you will discover topics such as

So if you want to learn more about the Salem Witch Hunt, scroll up and click the "add to cart" button