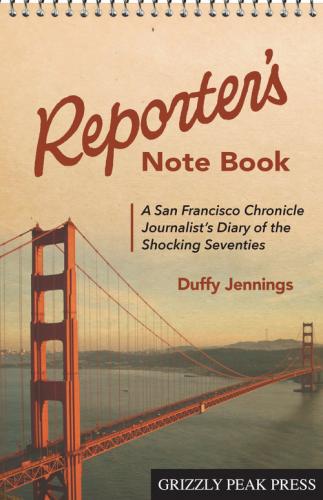 By Duffy Jennings
This Book Is Not Sold Online - Inquire In Store
On Our Shelves Now - Please allow up to 48-hours for Curbside Pickup orders to be processed.

Duffy Jennings became a San Francisco Chronicle reporter at the dawn of the 1970s, one of the century’s most turbulent decades for crime and social unrest in Northern California. The period was marked by political assassinations, serial killings, kidnappings, a mass suicide, attacks on police, a courthouse shootout, racial murders, gang warfare, and an assortment of counterculture terrorists and whack-job loners with guns and bombs. It was also a time of profound cultural and political upheaval anti-Vietnam War marches; draft protests; the black power movement; feminism; gay rights; and new excesses in sex, drugs, and rock and roll. In some ways, it was all connected. In just over eleven years, we went from the 1967 Summer of Love to the 1978 winter of hate.

Duffy Jennings has compiled a distinguished career in journalism and communications over five decades as a reporter, publicist, corporate communications executive, public relations consultant, magazine publisher and freelance writer. As a prize-winning reporter for the San Francisco Chronicle in the tumultuous 1970s, Jennings’ coverage included the City Hall assassinations of Mayor George Moscone and Supervisor Harvey Milk, the Patty Hearst kidnapping, and the Zodiac and Zebra serial murders. Veteran actor Adam Goldberg portrayed Duffy in the 2007 film, Zodiac. His writing has appeared in Rolling Stone, San Francisco Magazine, Los Gatos Magazine, SFGate.com and other publications. This is his first book. After his journalism career, Jennings served as vice president of public relations for the San Francisco Giants, online sporting goods retailer Fogdog.com, and two Silicon Valley public policy organizations. He also operated his own PR business for twenty years. Duffy earned his bachelor’s degree in journalism from San Francisco State University. He lives in the Bay Area with his wife, Bonnie Becker, and has two grown children, a step-daughter, and two grandsons.

“Duffy Jennings’ riveting coverage of the Moscone-Milk murders and the Dan White trial was an arduous reporting job and daily journalism at its finest. His account of a reporter’s life makes for vivid reading.”
— David Perlman, San Francisco Chronicle City Editor, 1977-1978

“Duffy Jennings brings the reader inside the San Francisco Chronicle newsroom directly to his reporter’s typewriter to present valuable insights into events during the most turbulent, chaotic decade in San Francisco’s modern history. He adds a very gutsy human dimension with intense and painful personal revelations even as he was writing the stories that mesmerized us during his prolific career.”
— Art Agnos, former Mayor of San Francisco

“Duffy Jennings wrote more than 500 stories for the San Francisco Chronicle, but he may have saved the best one — his own — for last. Written with admirable skill and moral clarity, his memoir reveals what it was like to cover a city gripped by the Zodiac and Zebra killings, Jonestown, the Moscone-Milk assassinations, and the Dan White trial. But this isn’t only a sharp, vivid snapshot of a city in crisis. It’s also a family saga that defies stereotypes at every turn.”
— Peter Richardson, San Francisco State University lecturer and author of A Bomb in Every Issue: How the Short, Unruly Life of Ramparts Magazine Changed America.