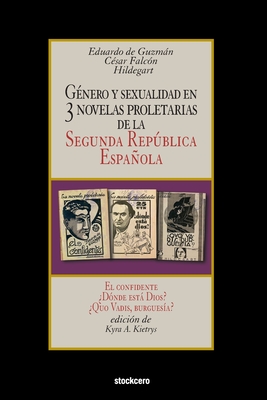 As Europe was falling into the grip of Hitler and Mussolini in the early 1930s, Spain was ousting its monarchs and dictators and moving towards a period of democracy. This brief moment of progressive political and social change was Spain's Second Republic (1931-1936). During the Spanish Second Republic, a series of affordable and accessible works of fiction--proletariat novels--was published to introduce radical political ideas to the working class. This critical edition presents three notable proletariat novels, chosen not only because of what they can teach today's reader about Spain's political history, but also because they lay bare early 20th century notions of gender and sexuality. El confidente by Eduardo de Guzm n offers a traditionally masculine understanding of friendship and loyalty. D nde est Dios? by C sar Falc n reveals the plight of apolitical working-class women and working-class men committed to the proletarian cause. Quo Vadis, burgues a? by Hildegart presents the themes of homosexuality and women's sexuality. The edition opens with an introduction to the period, the genre, and the authors. It also offers over a hundred contextual notes that explain historical references and offer insight into the representation of gender roles. The volume closes with suggestions for student engagement and further study.

The publication is written for students and scholars of Hispanic Studies and Gender & Sexuality Studies. Those interested in European history, European politics, and Memory Studies will also find it to be a valuable resource.