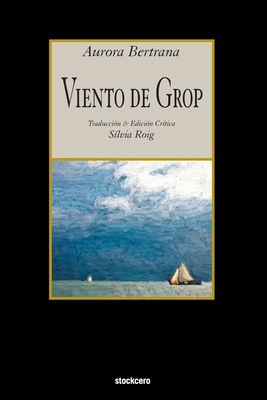 In «Viento de grop (Grop Wind) Catalan author Aurora Bertrana portraits the characters who inhabit a fishing village on the Catalan coast called La Cala. The plot revolves around the sentimental story of Rafel, a young local fisherman, and Mabel, a British tourist who spends her summer holidays in La Cala. Both live an unrestrained romance until Mabel returns to England and forgets her young lover. The sentimental failure leaves Rafel shattered, but through his story with Mabel he manages to mature while learning how to face reality.

In this novel Bertrana chronicles the fifties and sixties at La Costa Brava, a changing reality that overturns the local ways of life. Mass tourism modifies the Catalan coastal villages while transforming thehuman relations. Bertrana's writing conveys the local discomfort towards the tourist invasion, and criticizes the unfortunate economic conditions in which Spanish locals stood in comparison with foreign tourists. As in her other novels, in «Viento de grop Bertrana stresses the need to preserve the Catalan language and heritage, in a region both militarily occupied by the Franco dictatorship since 1939 and invaded by tourists from the sixties onwards.

The introduction to this edition includes a discussion on these issues and offers a critical study on the author and her work -and in particular on «Viento de Grop . It also contains an analysis of the film adaptation «The long agony of fish out of water , directed by Francesc Rovira Beleta.

This book is ideal for Spanish and Catalan language and literature, as well as tourism, cinema, culture and society, gender and studies on women courses.