Faith Alone: The Heart of Everything (Hardcover) 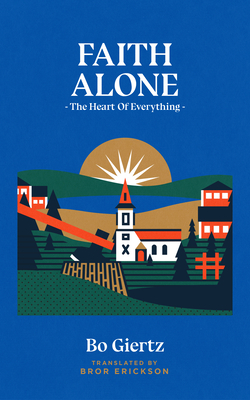 Bo Giertz wrote Faith Alone in 1943. It is a prequel to his better-known novel, The Hammer of God. The novel begins in 1540 and ends in 1543, during which time the largest peasant revolt in the history of Scandinavia occurred under the leadership of Nils Dacke. The Dacke Rebellion, as it is known, started in the county of Sm land but bled over into the Ydre district on sterg tland's southern border with Sm land.

The plot follows the story of two brothers, Anders and Martin. It was the wish of their mother that these two brothers would become priests in the Catholic Church, and so they were both sent to study for the priesthood in the town of Link ping, Sweden, when they were quite young. It was at this time that the Reformation began in Germany, and Sweden fought for independence from Denmark, breaking the Kalmar Union. German mercenaries hired by King Gustav Vasa to fight Danish troops brought Reformation literature with them. So, Martin became a Lutheran and left for Stockholm to work for King Gustav Vasa as a scrivener. His brother Anders continued with his studies and became a Catholic priest.

When the king has to pay his debt to Lubeck for the mercenaries he hired for the war, he confiscates the church's land, bells, silver, and gold to do so. With this he firmly declares his cause with the Reformation doctrine of Martin Luther. However, the people of Sm land are fond of Roman Catholicism and chafe at Lubeck's measures. So, they rebelled. Anders takes up with their cause and joins with Nils Dacke and his men. Martin stays with the king, before becoming disillusioned and falling in with a group of Schw rmerei, or pre-Pentecostal legalists. As the war comes to an end both brothers are brought back to the Reformation faith through the patient shepherding of a Lutheran priest named Peder.

This is Bo Giertz's masterpiece-written with the doctrinal clarity and purpose of G.K. Chesterton and C.S. Lewis, the historical acumen of Bernard Cornwell, and the psychological insight of Kafka. The result is a Scandinavian Noir that cuts open the soul and lays it at the foot of the cross.