Madness in Crowds: The Teeming Mind of Harrison Cady (Hardcover) 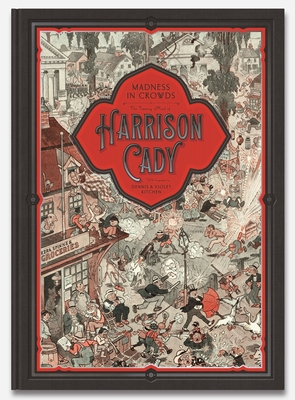 Madness in Crowds is an overflowing art book monograph collecting the charming, virtuosic and staggeringly detailed work of the cartoonist and graphic artist Harrison Cady. A master of creatures, contraptions and crowd scenes, Cady is best known today for illustrating the works of children's book author Thornton Burgess, but this tome - the first ever collection of Cady's works - explores in detail the rest of his staggeringly prolific six-decade career, in particular his stunning, overcrowded, and obsessively rendered illustrations for the original Life magazine. Features over 300 images, a detailed biography by Denis and Violet Kitchen, and an introduction by Gary Panter. 10x14", 192 pages.

Denis Kitchen was an original member of the Underground Comix movement in the late '60s and '70s, perhaps equally well known as the founder and publisher of the pioneering publishing house Kitchen Sink Press (1969-99). He also founded the Comic Book Legal Defense Fund (1986-), is the author or co-author of several books, a literary and art agent, a longtime editor, and a curator of comic art exhibitions in America and overseas. A monograph of Kitchen's artistic career, The Oddly Compelling Art of Denis Kitchen, was published by Dark Horse in 2010. With partner John Lind he created the Kitchen Sink Books imprint in partnership with Dark Horse Comics in 2013. He was elected to the Will Eisner Hall of Fame in San Diego in 2015. Violet Kitchen is an Eisner-nominated cartoonist, illustrator and writer based in Western Massachusetts. In addition to Madness In Crowds, she has multiple other books in print and in progress, and her work has been profiled in the New York Times, the London Telegraph, and the Boston Globe.