Pushed: Miners, a Merchant, and (Maybe) a Massacre (Paperback) 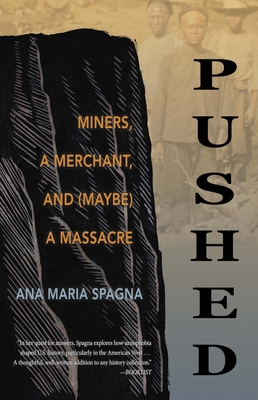 A personal investigative journey into the so-called Chelan Falls Massacre of 1875. Amid the current alarming rise in xenophobia, Ana Maria Spagna stumbled upon a story: one
day in 1875, according to lore, on a high bluff over the Columbia River, a group of local Indigenous people murdered a large number of Chinese miners--perhaps as many as three hundred--and pushed their bodies over a cliff into the river. The little-known incident was dubbed the Chelan Falls Massacre. Despite having lived in the area for more than thirty years, Spagna had never before heard of this event. She set out to discover exactly what happened and why. Consulting historians, archaeologists, Indigenous elders, and even a grave dowser, Spagna uncovers three possible versions of the event: Native people as perpetrators. White people as perpetrators. It didn't happen at all. Pushed: Miners, a Merchant, and (Maybe) a Massacre replaces convenient narratives of the American West with nuance and complexity, revealing the danger in forgetting or remembering atrocities when history is murky and asking what allegiance to a place requires.

Ana Maria Spagna is the author of nine books including the young adult novel The Luckiest Scar on Earth and most recently the poetry chapbook Mile Marker Six. Her work has been recognized by the River Teeth Literary Nonfiction Prize, the Society for Environmental Journalists, the Nautilus Book Awards, and as a four-time finalist for the Washington State Book Award. A former backcountry trails worker, Ana Maria now teaches in MFA programs at Antioch University, Los Angeles, and Western Colorado University.