The Lost Heir: an Unruly Royal, an Urchin Queen, and a Quest for Justice (Ari Ara #2) (Hardcover) 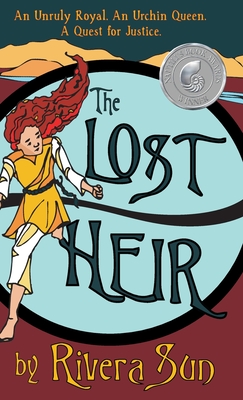 This is book number 2 in the Ari Ara series.

Going beyond dragon-slayers and sword-swingers, The Lost Heir blends fantasy and adventure with social justice issues in an unstoppable story that will make you cheer

Two warring nations. One royal heir. A world about to explode.

Mariana Capital is in an uproar A half-wild orphan has been discovered to be the long-lost daughter of the King of the Desert and the Queen of Mariana. As the heir to two thrones, Ari Ara is thrust into a world of nobles and street urchins, warriors and merchants, high fashion and dangerous plots. The splendor dazzles her until the day she sneaks out to explore the city and makes a shocking discovery . . . the luxury of the nobles is built by the forced labor of her father's people.

Thousands of water workers have come from the desert to trade their work for water. They labor on the river docks, in the noble houses, and even in the sewing rooms making the fancy gowns Ari Ara is expected to wear. Outraged, she sets out on a quest for justice. The nobles turn against her, someone tries to kill her, and her royal blood is thrown into question. Unexpected allies rush to her side: the Urchin Queen, a monkish young scholar, a desert seamstress, and a mysterious hawk keeper. Before she knows it, she's sparked an uprising like nothing Mariana Capital has ever seen

With all the fun of a sword-swinging adventure, but without the violence, The Lost Heir spins a spectacular story with strong female characters and powerful social justice themes. "Armed" with nonviolence and love, Ari Ara sets out to restore the honor and dignity of both her peoples. A shero with spunk and spark, Ari Ara confronts prejudice, discrimination, bullying, and injustice with all the action, adventure, magic, and fantasy that readers love

Praise for The Lost Heir
"...a beautiful experience...one that everyone in the world needs - now more than ever."
- Heart Phoenix, River Phoenix Center for Peacebuilding

"...an impressive feat an exciting story that deftly teaches ways to create a world that works for all...outstanding contribution to the field of nonviolence "
- Kit Miller, Executive Director, M.K. Gandhi Center for Nonviolence

"I highly recommend gathering the children around you and reading The Way Between and The Lost Heir so everyone can enjoy and embrace these masterfully-told, exciting adventures."
- Scotty Bruer, Founder, Peace Now

"Rivera Sun's creativity, wisdom, insight and joyful nonviolent activism for all ages fills me with awe and hope. If we were all to read her books the way we have read Harry Potter's, we would be well on our way to sending a different message to our children."
- Veronica Pelicaric, Author, Pace e Bene/Campaign Nonviolence