Three Treatises by Luther: An Open Letter to the Christian Nobility, The Babylonian Captivity of the Church, & The Freedom of the Christian (Christian Heritage) (Paperback) 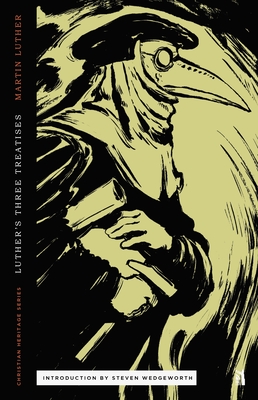 "Luther is lyrical, even ecstatic, as he proclaims the benefits of justification by faith alone...The three treatises are short reads. It would not be unfair to refer to them as pamphlets. But they are surely the weightiest pamphlets in Christian history." from Wedgeworth's Introduction

Luther was not just a firebrand who riled up the establishment and accidentally started a religious movement. In these three treatises, we get a full picture of what Luther stood for and what he stood against. In his An Open Letter to the Christian Nobility, he explains the doctrine of the priesthood of all believers and calls upon German princes to reform the church, since the Papacy refused to do so. Then in The Babylonian Captivity of the Church he attacks the sacramental system of the Roman Catholic church and explains that the Lord's Supper is not a sacrifice made to God, but an offering of the promise to the people. He calls for them to feed the people the bread and wine again. Finally, in his inspiring On the Freedom of the Christian, Luther proclaims the heart of the Reformation: the doctrine of justification by faith alone. Because God has saved us once and for all from our sins and no works can increase our salvation, we are free to love both God and our neighbor, not from a spirit of fear, but out of gratitude for everything God has done for us. Read these works and be inspired.

"What man is there whose heart, hearing these things, will not rejoice to its very core, and in receiving such comfort grow tender so as to love Christ, as he never could be made to love by any laws or works? Who would have power to harm such a heart or to make it afraid? For it believes that the righteousness of Christ is its own, and that its sin is not its own, but Christ's, and that all sin is swallowed up by the righteousness of Christ is a necessary consequence of faith in Christ.