Most Comprehensive Origins of Cliches, Proverbs and Figurative Expressions: Index for All Volumes (Paperback) 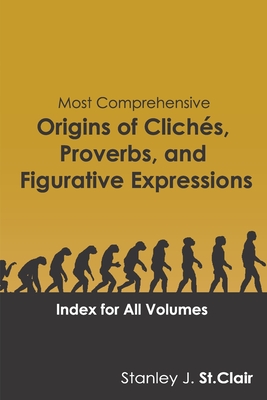 Most Comprehensive Origins of Clich's, Proverbs and Figurative Expressions Index for All Volumes was specifically compiled to tie together all three volumes of this unique work, making it an easily referenced work with over 4,100 entries which may be used by any person desiring to discover the most accurate information available on the meanings and origins of idiomatic English, not only in America, but in all countries in which English is the primary language. Not only does this study embrace figurative speech, but contains many foreign phrases which have been integrated into our everyday conversation and reading. It also has proverbs and sayings which predate English, originally being in Hebrew, Latin, and other tongues, some of which have existed for thousands of years. Many expressions have been incorrectly attributed by other sources. While no work is perfect, these books have been meticulously researched, and some updated as new information became available. The Original Volume has found its way into public, school and university libraries, and has received much praise from professors, authors, clergymen and newspaper journalists.

Stanley J. St. Clair is the author of over 20 published books, and his articles and poetry have appeared in American publications, as well as several in other countries. He is the owner of St. Clair Publications, and a retired insurance agency manager. He has an LUTCF designation from the National Association of Life Underwriters, and is a graduate of Covington Theological Seminary with degree in Religious Education. He also briefly studied creative writing at Tennessee State University. He was knighted in 2004 by The Sovereign Military Order of the Temple of Jerusalem, and is a Kiwanian who has served in every position in his local club, as well as a past Vice President of the Kentucky-Tennessee District of Kiwanis International. He was a long term Commissioner and a past Eastern U.S. Vice President of the Scottish Clan Sinclair. In 2007 he was honored as a member of the Cambridge Who's Who. He has three living children, one stepdaughter, fourteen grandchildren and eleven great-grandchildren. He and his wife, Rhonda, live in Tennessee.