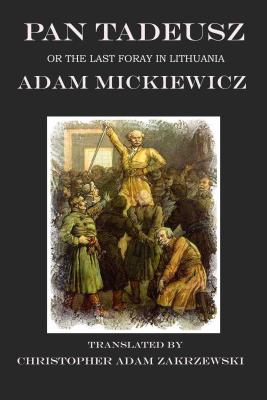 A new translation of the classic tale of mystery, war and patriotism by Adam Mickiewicz

Pan Tadeusz is an epic poem by the Polish poet, writer and philosopher Adam Mickiewicz. The book was first published in June 1834 in Paris, and is considered by many to be the last great epic poem in European literature.  It is a tale of mystery, mistaken identity and patriotism set the days before Napoleon's invasion of Russia.

The story takes place over the course of five days in 1811 and two days in 1812, at a time in history, when Poland-Lithuania had already been divided between the armies of Russia, Prussia, and Austria and erased from the political map of Europe, although in 1807, just before the story begins, Napoleon had established a satellite Duchy of Warsaw in the Prussian partition, in existence until the Congress of Vienna held in the aftermath of Napoleonic defeat.

The place is situated within the Russian partition, in the village of Soplicowo; the country estate of the Soplica clan. Pan Tadeusz recounts the story of two feuding noble families, and the love between Tadeusz Soplica (the title character) of one family, and Zosia of the other. Another sub-plot involves a spontaneous revolt of the local inhabitants against the occupying Russian garrison. Since Mickiewicz published his poem as an exile in Paris, he was free of the Russian censors to talk openly about the occupation.

Christopher A. Zakrzewski is British-born, with a B.A. in modern languages (University of Guelph), an M.A. in Russian Language and Literature (University of Waterloo), and several years of doctoral work in Slavic philology (University of British Columbia).

His expertise is Polish Romantic Poetry. He has published the only significant English-language fragment of Pan Beniowski by Juliusz Slowacki, the complete cycle of Crimean Sonnets by Adam Mickiewicz, and recently completed a major new prose rendering of Mickiewicz’s 10,000-line masterpiece Pan Tadeusz, which has been serialized by Sarmatian Review (Rice University, Houston, Texas). The Polish Review in New York also published the work (described as a “new annotated translation in elegant English prose”) as an electronic book as part of its newly launched Library of Polish Classics Series (208/30 Press).

Among the contemporary Polish writers he has translated into English are Kazimierz Braun, Maciej Patkowski, Joanna Rostropowicz-Clark, and Bronislaw Wildstein.

Adam Bernard Mickiewicz  24 December 1798 – 26 November 1855) was a Polish poet, dramatist, essayist, publicist, translator, professor of Slavic literature, and political activist. He is regarded as national poet in Poland, Lithuania and Belarus. A principal figure in Polish Romanticism, he is counted as one of Poland's "Three Bards" and is widely regarded as Poland's greatest poet. He is also considered one of the greatest Slavic and European poets and has been dubbed a "Slavic bard". A leading Romantic dramatist, he has been compared in Poland and Europe to Byron and Goethe.

He is known chiefly for the poetic drama Dziady (Forefathers' Eve) and the national epic poem Pan Tadeusz. His other influential works include Konrad Wallenrod and Grazyna. All these served as inspiration for uprisings against the three imperial powers that had partitioned the Polish-Lithuanian Commonwealth out of existence.