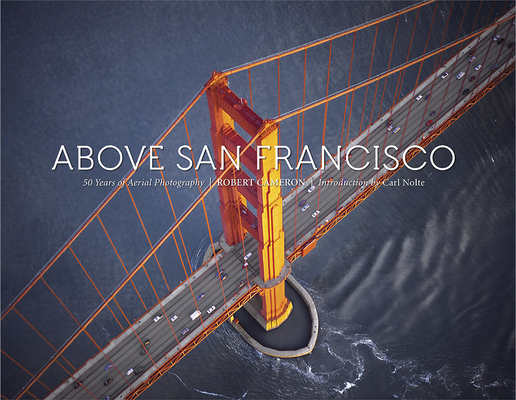 By Robert Cameron (By (photographer)), Carl Nolte (Introduction by)
$60.00

In 1969, Robert Cameron (1911–2009) began leaning out of a helicopter with his Pentax 6×7 cm camera to shoot city- and landscapes above his beloved Bay Area. Since WWII, when Cameron worked for the War Department as a civilian assigned to take aerial night shots of exploding ordnance and tracers, aerial photography was his passion. With his masterful take on exposure, color, and composition, Cameron captured iconic structures and landmarks alongside the dazzling beaches and undulating terrain that comprises Northern California. Accompanying Cameron’s exquisite and genre-defining aerial shots are photographs taken in the last decade, picking up the torch after Cameron’s death. Since his first iconic images were made, we look back at Cameron’s stunning aerials, noticing how much has changed, but also noting how much has stayed the same.

Robert Cameron’s photographic career began in 1933 as a news photographer for the Des Moines Register. During World War II, he worked for the War Department as a civilian photographer. After moving to San Francisco, he self-published his first Above book in 1969 and went on to publish 16 additional titles, with over three million copies in print. For more information on Cameron’s photographs, go to cameronfolio.com. Carl Nolte writes the weekly Native Son column for the San Francisco Chronicle, where he has worked since 1961.
Carl Nolte is a fourth-generation San Franciscan and a reporter and columnist for the San Francisco Chronicle, where his Native Son column appears every Sunday. In a long career with the paper, he has also served as an editor and was a war correspondent in the Persian Gulf war and during the invasion of Iraq. He has traveled extensively, particularly by sea. Nolte served for seven years as chairman of the board and CEO of the National Liberty Ship Memorial, which owns and operates the SS Jeremiah O’Brien, a World War II Liberty Ship. Among other awards, he has received a Maritime Heritage Award from the San Francisco Maritime National Park Association, the President’s Gold Medal for Public Service from the California Maritime Academy, and an honorary doctorate in humane letters from the University of San Francisco. He has written three books, most recently The San Francisco Century (2006).