Folding the Red Into the Black: Developing a Viable Untopia for Human Survival in the 21st Century (Paperback) 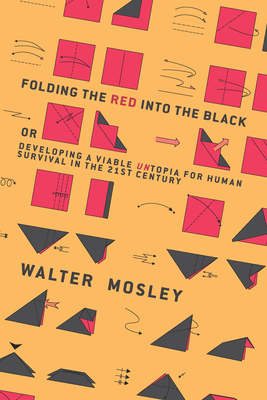 Walter Mosley is one of America's bestselling novelists, known for his critically acclaimed series of mysteries featuring private investigator Easy Rawlins. His writing is hard-hitting, often limned with a political subtext--aimed at a broad audience. When Mosley was working on a doctorate in political theory, he envisioned himself writing very different kinds of books from the ones he writes now. But once you've been tagged as a novelist, and in Mosley's case, a genre writer, even a bestselling one, it is hard to get an airing of ideas that cross those boundaries. Folding the Red into the Black has grown out of Mosley's public talks, which have gotten both enthusiastic and agitated responses. Mosley's is an elastic mind, and in this short monograph he frees himself to explore some novel ideas. He draws on personal experiences and insights as an African-American, a Jew, and one of our great writers to present an alternative manifesto of sorts: We need to throw off the unbearable weight of bureaucratic Capitalist and Socialist demands; demands that exist to perpetuate these systems, not to praise and raise humanity to its full promise. And so I propose the word, the term Untopia.

Walter Mosley was chosen as the 2016 Grand Master by the Mystery Writers of America, who will present him with the award in April 2016. Born in California in 1952, he lives and works in New York City. Best known for his Easy Rawlins series, for inspiration he draws on his African-American and Jewish roots.